The town of Zuni is indistinguishable from any other small American town. The only difference is that it is inhabited by about 6,000 Zuni people. Like the Hopi, Zuni are thought to be descended from the Ancient Puebloans who famously and mysteriously abandoned their cliff dwellings centuries ago, but the languages of the two groups are meaningfully unrelated.

Many of the Pueblo Indians offer guided tours, the best way to get a sense of the culture and way of life. We took one to the Nuestra Señora de Guadalupe Church (no longer used as a Catholic church) where the guide talked about Zuni culture, which (again like the Hopi) is matrilineal for the purposes of primary clan affiliation and land ownership. However, it is the men who take part in all religious activities, which seems to consume a large portion of their waking hours. The women perform the more traditional roles, such as preparing food and keeping the home. The Zuni have highly complex social relationships and practice a complex religion that are unlike that of other Pueblo Indians.

A researcher has suggested that there is a genetic connection between the Zuni and Japanese. She speculates that 13th-century Japanese Buddhist wayfarers may have sailed across the Pacific and eventually discovered and mixed with the Zuni sometime during the thirteenth century. There are tantalizing connections, such as a serious kidney disease, many words that are similar for the same things (cognates), symbols (such as the chrysanthemum), cosmological beliefs and artistic motifs that are common to both. Zuni origin tales tell of an emergence from the underworld (Grand Canyon) and eventual migration to their current and final location. There is no tale of any ancestors having crossed an ocean, though the word is associated with certain mythological figures. The book was also translated into Japanese; for this reason, many Japanese visit the Zuni pueblo. 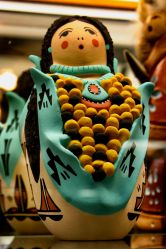 The arts & crafts shops and proprietors were happy to educate us about Zuni artistry—their fine stone inlays in silver jewelry, stone fetishes, their pottery with cultural and religious motifs and kachina dolls, who like the Hopi consider them spirits from the San Francisco peaks that lie to the west.

Curiously, the Zuni allow you to take photos for a $10 fee, which makes you wonder to what extent the issue that one’s spirit being trapped in images is taken seriously by all native tribes in the area. The Hopi seemed genuinely concerned, but for a fee, it’s not an issue with the Zuni?

We had lunch at the Inn at Halona, where (during my research) a website highly recommended the fried chicken with chile sauce. The restaurant at the “inn” turned out to be a deli tucked away in a grocery store and the fried chicken just like what you’d find at any supermarket behind the fast food counter. The red chile sauce was served in a small plastic tub. Pretty disappointing.