On our way home from Vancouver, we were driving through Everett at lunchtime. We stopped at Hawaiian Sun BBQ based on a recommendation from friends. It sits in a strip mall that happens to also have one of my favorite Thai restaurants (Spice of Thai) that I used to frequent when I worked in Everett many years ago. The place is small and appears to be entirely run by a family, all of whom were really friendly. We are ever hopeful that every Hawaiian restaurant we try is da one so we don’t have to travel 3,000 miles to have the genuine stuff.

Let’s start off with the mochiko chicken. It’s different from most interpretations because the boneless chicken thighs are rather large, with a portion of the skin left on for added crispiness out of the fryer. Although I’d rather have smaller pieces, these were quite good, not being quite as sweet as most versions.

A rather bland broth spoiled the wonton saimin, wontons filled only with ground pork and bamboo shoots (and little else), shrimp and passable slices of char siu. Baby bok choy and sliced green onions rounded out the ingredients.

Too much cabbage and too little pork detracted from the kalua pork, which itself was somewhat dry, perhaps too lean, and curiously overly smoked (from liquid smoke?). The macaroni salad was also middling. Tradition was waived as only a single scoop of rice was served with each plated entrée. 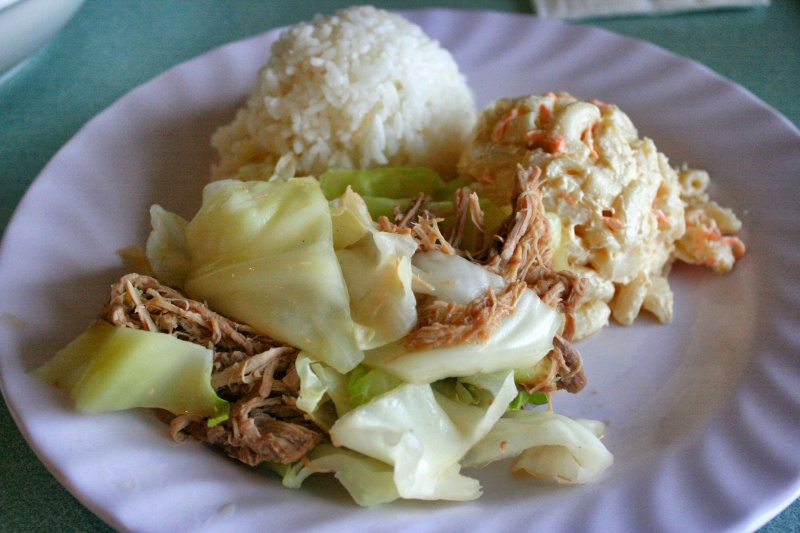 So, our quest for ono grindz in the Northwest continues.