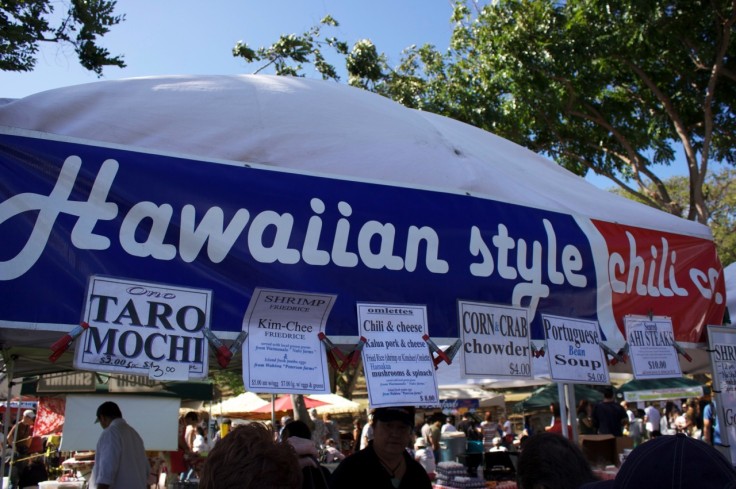 The Honolulu Saturday Market is, without doubt, one of the best farmers markets in the country for foodies. It has its share of produce stalls; they mainly benefit the locals who come here for fresh fruits and vegetables. But, I’ll wager that the vast majority of visitors come here for the incredible selection of prepared foods. We’re talking about food beloved on the islands. The merging of cooking influences (mostly from Asia) is reflected in the offerings. While the food may not be the best examples, it is still good. The variety alone in an open-air market setting is exciting.

After contemplating for a while, at approximately 10:15 am (45 minutes before the market closed) we decided on a salmon fried rice and grilled kasu cod, grilled corn flavored with shoyu butter and furikake, and a mango and ginger drink. Our plan was also to get grilled abalone that were selling for $5 a small pair, but they had all sold out. It was amazing that this hard-to-get shellfish was being sold at all. We almost lost out on the corn; I managed to get one of the last ones. I did get the last fried rice combination, too. The moral of the story is that it’s best to get what you want early, even if it isn’t quite the lunch hour.

As for the food itself, the kasu cod was delicious, though somewhat overly charred. The salmon fried rice tasted less interesting than it sounded, though it wasn’t bad. The corn was over-grilled to the point of getting dried out and the furikake made it too salty. Any drink from the PacifiCool booth is always refreshing, although the large amounts of ice cubes tend to dilute the drink if left too long. The ginger syrup they sell is really good stuff. For dessert, we snagged a couple of shave ices, one topped with lilikoi syrup, the other with ginger syrup which was also sprinkled with dried ginger flakes.