In early March, Coupeville, home of the world’s largest mussel farm, plays host to the annual Penn Cove Mussel Festival to showcase its famous bivalves. Even though the weather this morning was ominous (freezing rain), a group of us decided to take part in the festivities. The rain shadow effect didn’t disappoint; the closer we got to Whidbey Island, the clearer the skies became. Still, with the wind, it was pretty frigid walking around town.

Our entire day was spent tasting a plethora of mussel dishes. Ten local restaurants hosted the “best-tasting” mussel chowder contest. Participants walk or take a free shuttle to each restaurant to sample a small serving of chowder. At the end of the two sets of tastings (5 restaurants each), you select which was your favorite among the five. As we didn’t finish our runs, we didn’t submit our votes. One of our favorites was our first restaurant Christopher’s, which served a chowder with smoked salmon that was wonderfully rich and smoky.

The Beer Hall sold steamed mussels, beer and wine under a covered tent. The four of us wound up eating three large bowls of steamers with bread slices to mop up the broth. 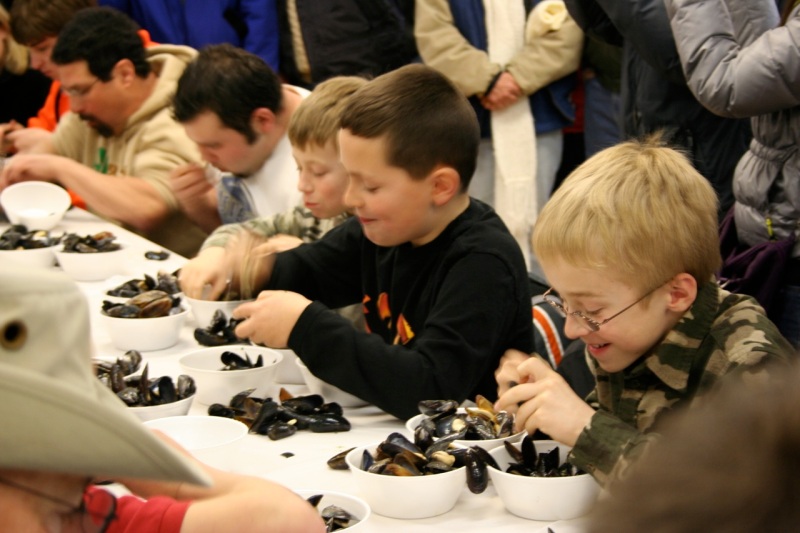 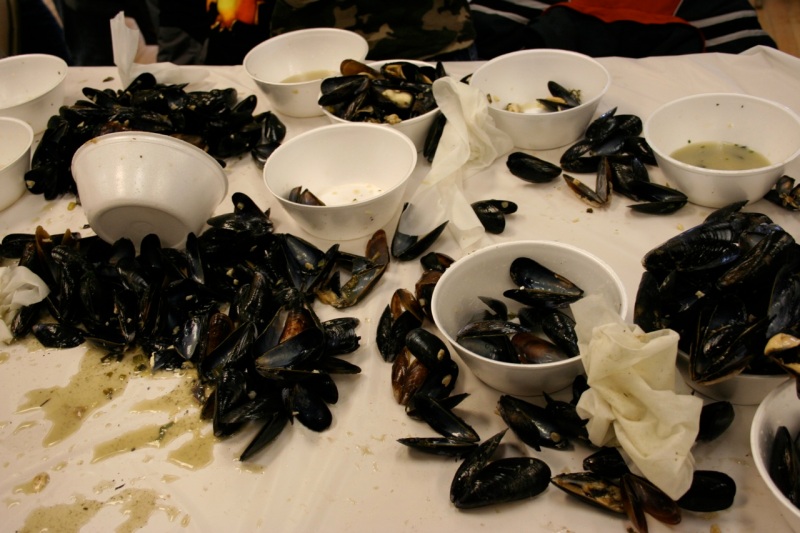 At the Coupeville Recreation Hall, mussel cooking demos and the mussel-eating contest were held. When we arrived, samples were given out of mussels prepared by chefs from the Ivars family of restaurants, steamed with Marsala, roasted fennel and andouille sausages from Uli’s (there is a store at Pike Place market). The broth was wonderful, though salty. The ingredients included garlic, shallots, thyme, parsley, butter and olive oil. The mussel-eating contest was later in the afternoon. Contestants from as far away as Florida and locals dove in to finish three 22-oz. bowls of steamed mussels. Whoever finished first was declared the winner. Based on recent hot dog eating contest results in Coney Island, I placed my bet on a couple of Asian guys from Vancouver, B.C. I was close; one of them came in second. Some very young boys from Oak Harbor also took part, and they really seemed to be enjoying the mussels. 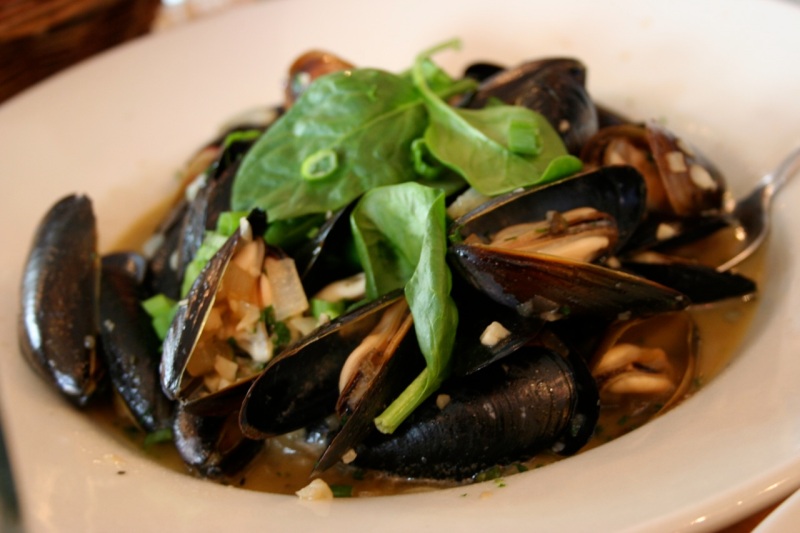 As if this weren’t enough, we actually had lunch, too. Because of its wonderful chowder, we decided to return to Christopher’s. We’re glad we did because we shared two superb steamed mussel dishes that were prepared only for the mussel festival. One was steamed with Black Butte porter and garnished with baby spinach. None of the beer’s hoppiness or coffee flavor intruded. Instead its smoky character combined wonderfully with the butter and green onions to make a terrific, bread-dipping, though salty broth. Amazingly, top honors has to go our other entree, mussels steamed with smoked paprika. Infused with hints of smoked bacon, these mollusks were bathed in an extraordinary broth with roasted red bell peppers, green onions and corn.