One of the most recognizable structures in all of Italy is the Leaning Tower of Pisa. En route to Cinque Terre, we made a brief stop in Pisa with storm clouds threatening above. The crowds were large, as you might expect at one of Italy’s iconic sites and a UNESCO World Heritage Site. After walking through the cathedral and having lunch in the plaza, a torrential rain came down and everyone scrambled to return to the bus, unfortunately without having gotten a closer look at the tower and the baptistery.

From the very beginning, the bell tower (campanile) began to tilt because of unstable subsoil. Begun in 1063, construction endured fits and starts through several wars and periods of inactivity; the tower was not completed until 1372. It is actually slightly curved as upper levels were constructed with higher ceilings along the outer edge to compensate for the tilt.

Artistically more important than the tower is the cathedral, Romanesque in style, and more specifically Pisan Romanesque, although the interior shows other artistic influences, including a Byzantine mosaic in the apse and Corinthian columns between striped arches that look Moorish. The columns originally came from a mosque in Palermo . The coffer ceiling atop the nave is gilded and decorated with Medici shields. 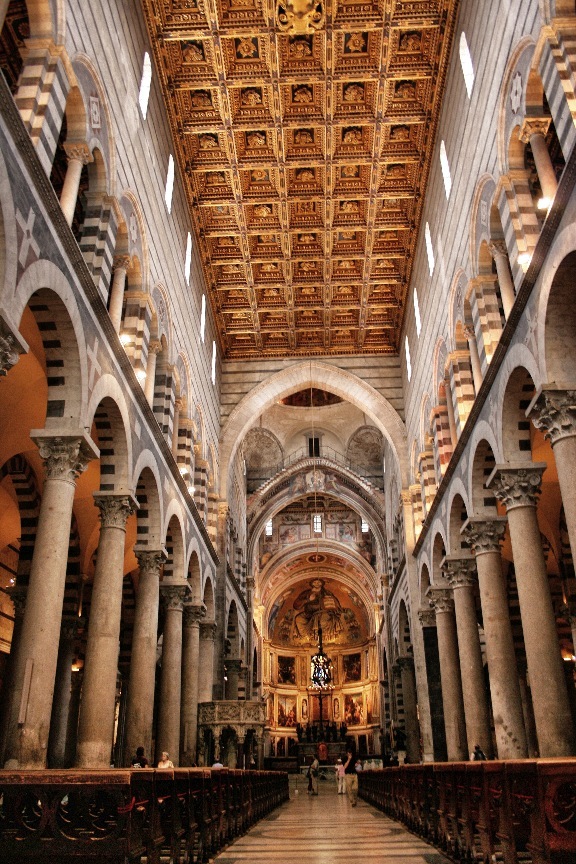 The entire complex was such a grand undertaking that it is called the Field of Miracles.