Italians speaking German? Italian villages that look Austrian? These are not so odd in the northeastern part of Italy (Trentino-Alto Adige) that belonged to Austria before 1919. This region is the home of the Dolomites, a spectacular mountainous region that is in the South Tyrolean province and a UNESCO World Heritage Site.

As we arrived here early last evening after an all-day bus ride from Lake Como (with a stop in Verona), we were immediately struck by the alpine scenery, passing vineyards and apple orchards along the way. We stayed at the Pension Seelaus in Compatsch, situated in Seiser Alm, the highest alpine meadow in all of Europe. The inn had lots of charm—quaint planter boxes hung from the upper-story balconies filled with petunias. There was time only to look around briefly before we sat down for a group dinner:  a salad bar (including dried chili peppers and anchovy croutons), ham and barley soup, sautéed fish, spinach and steamed potatoes with hollandaise, and flan for dessert. 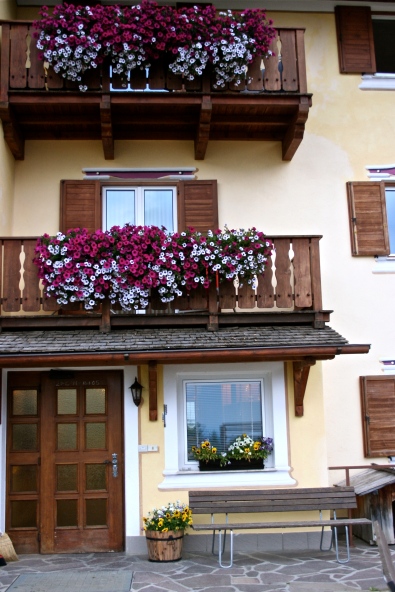 We stayed at the Pension Seelaus

It was easy to see why this region of majestic beauty is so universally admired. Broad subalpine meadows are edged by craggy, steeply sloped mountains, the elevation differences so great that they seem exaggerated. Here, in Compatsch, the Schlern looms in the distance to the south and typifies the mountain scenery. The rocks appear as a bluish-grey from its calcium-magnesium carbonate composition (dolomite).

In this setting, many recreational opportunities are enjoyed, mostly skiing and hiking. After a morning briefing session by Robin (our guide), we were on our own and decided on a longer hike to the upper elevations with four other tour members. We got sidetracked and wound up at the top of the ski lift above Saltria. As the lifts were not operating, we had to scramble down the hillsides to find a trail. One led to Goldknopf where we decided to have lunch and where we were introduced to speck, a prosciutto-like ham made here in South Tyrol. After a long hike and worn-out, we decided to take a bus from midway between Saltria and Compatsch back to the inn in time to have a cold glass of beer before dinner. In the bar, TV sets were showing the destruction wrought by hurricane Katrina on New Orleans only days before.

Many of the hikers we greeted along the trails were German-speaking and they all used hiking poles.

Most of the hikers were German -speaking

All the signs were bilingual, in Italian and German. Depending on which part of the Tyrolean alps you happen to live in, you are likely to speak one or the other language more commonly.

German-language signs are not uncommon

This part of Italy was a pleasant surprise for us. Its mountainous terrain and alpine scenery reminded us more of what we’d expect in, say, Switzerland. This is a breathtakingly beautiful area where we could see returning one day.