Though it was less than 200 miles, it took us almost ten hours to get home. Car trouble? Traffic? Weather? No, it was the scenery. We were in no hurry to get home. Every time I take this drive to and from the Methow Valley, it’s hard to keep my eyes on the road, so breathtaking are the views along the way. Add to this spectacle the brilliant lakes that stand out like turquoise gems in the mountainous landscape and you have ingredients for one of the best drives in the world, the North Cascades Scenic Highway.

The North Cascades has been called the American Alps. Their sheer ruggedness and steeply sloped sides remind many of the European mountain range though by no means are they as high. Unlike the southern Cascade mountains that can be seen along I-90, the peaks visible from SR-20 are more jagged, almost knife-edged, and clad with the largest number of glaciers in the Lower 48.

Within a half hour of leaving downtown Winthrop (westbound), we arrived at Washington Pass, a stretch of highway that includes a long hairpin turn. High desert became mountainous scenery almost in an instant. The curve affords jaw-dropping views of Liberty Bell and the Kangaroo Ridge, among other massifs, the excitement of the experience heightened by watching the scenery revolve around you as you ascend (or descend) the highway. 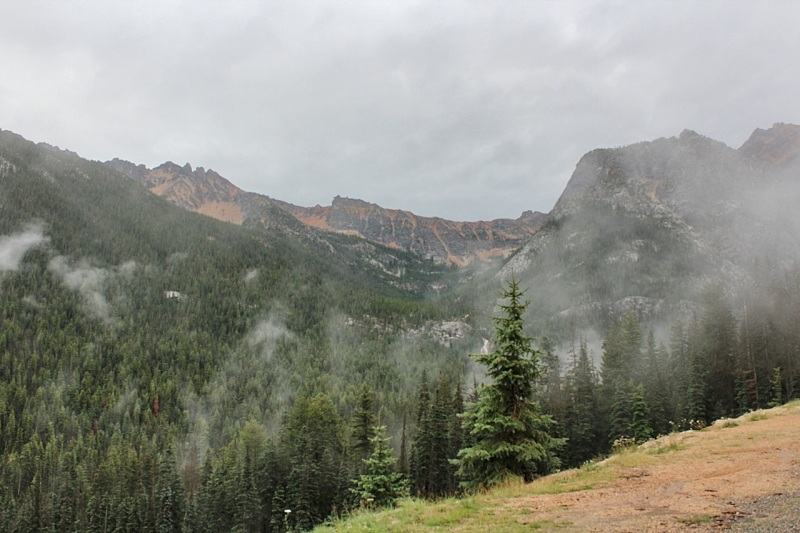 Even with low cloud cover and light fog obscuring the surroundings, I was tempted to stop or at least slow down often and take good looks. There are several turnouts to get better (and safer) views than craning your neck while negotiating the bend. But without doubt the best place to get a higher altitude panorama of the surroundings is the Washington Pass Overlook (mile post 162), only a short distance further up after completing the turn. The loop trail is short and has many surprises, including sections of the path that hug the edge of the precipitous stone outcropping on which the trail is built and, most spectacularly a magnificent view of the twisting highway, Early Winter Valley, Kangaroo Ridge and the towering craggy peaks that include Liberty Bell. 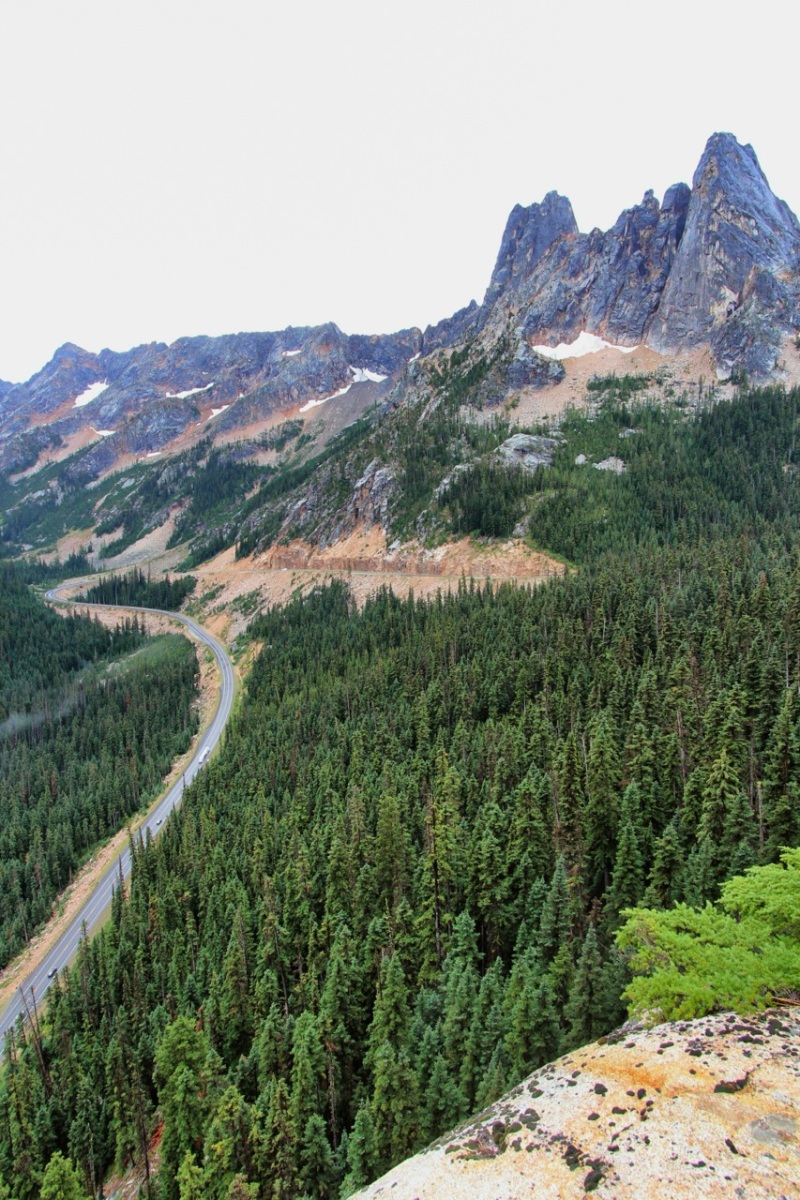 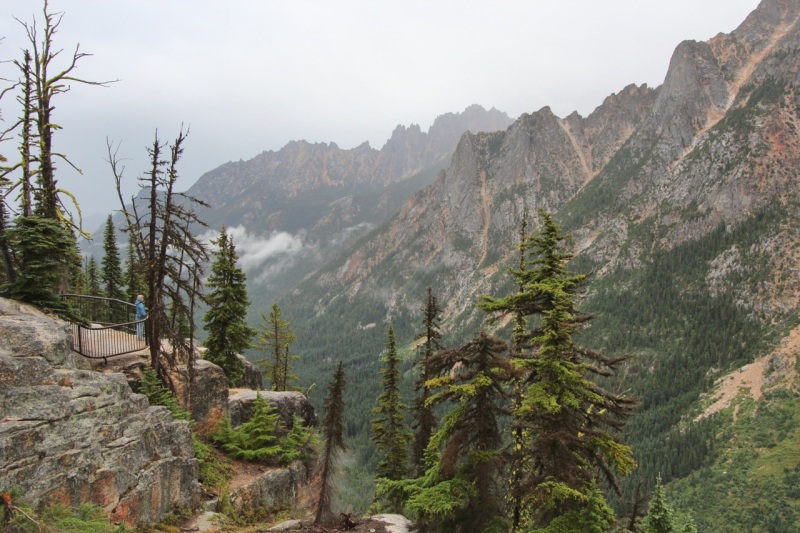 Before long, we broke free of the cloudy weather and the lakes created by the massive hydroelectric projects came into view. There are three dams along the Skagit River, 7 miles between Gorge and Ross Dams, with Diablo Dam in between. The reservoirs provide power and water to Seattle and surrounding areas. There are a few stopovers to view Ross Lake, the largest reservoir at 22 miles long that extends a bit into Canada, but none of them provides a very good look. At mile marker 134, a trail goes down to the lake itself. With confusing information at the trailhead, we hiked down the path briefly but decided to turn around when there wasn’t the slightest hint of the lake.

The most stunning view is reserved for the Diablo Lake Overlook (mile post 132), further west along SR-20. The vista is breathtakingly beautiful on a clear day, surrounded by majestic mountain peaks and alpine scenery—and the blue-green lake. The tranquility of the scene belies the restless geologic forces at work, briefly described on interpretive panels. The lake’s turquoise color, a result of the interaction between light and suspended glacial flour, never fails to leave a lasting impression. 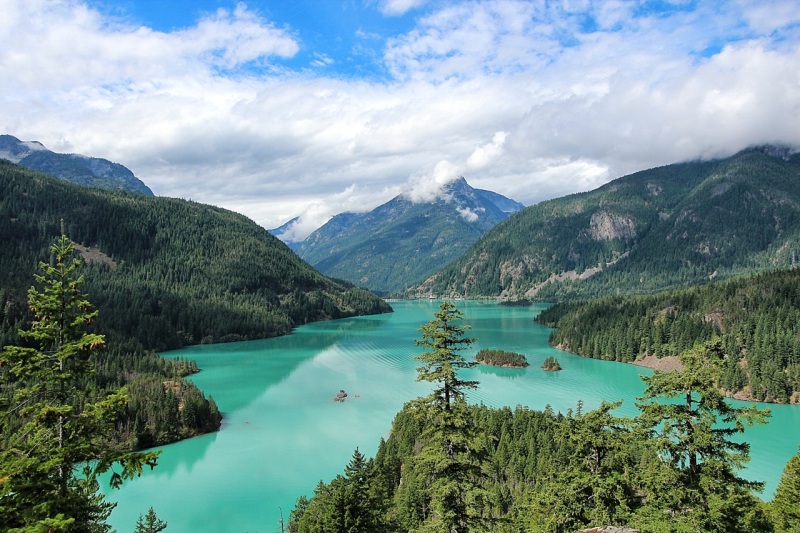 Diablo Lake as viewed from the overlook

My wife’s friend takes classes taught by the North Cascades Institute, ranging on a variety of topics from natural history, art, digital photography, botany, cultural anthropology and more. Most of the classes are taught at the North Cascades Environmental Learning Center, accessible from SR-20 at Diablo Dam Road (mile post 127.5). En route, you cross the narrow Diablo Dam, flanked by art deco lamp posts. Boat tours also originate from the lake’s shore. This area is a fine way to view Diablo Lake up close.

Gorge Dam is the last of the three dams going westbound. A somewhat obstructed view of the dam and the lake behind it can be had a short distance from the parking lot of the Gorge Dam Overlook. This is the least interesting lake view, especially compared to the Diablo Lake Overlook (above), but it’s a pleasant and short hike to the viewpoint. A short walk from the parking area back on SR-20 is the bridge from which you can get a humbling view of the Gorge Creek waterfall. Along with Stetattle Creek, Gorge Creek drains into Gorge Lake. 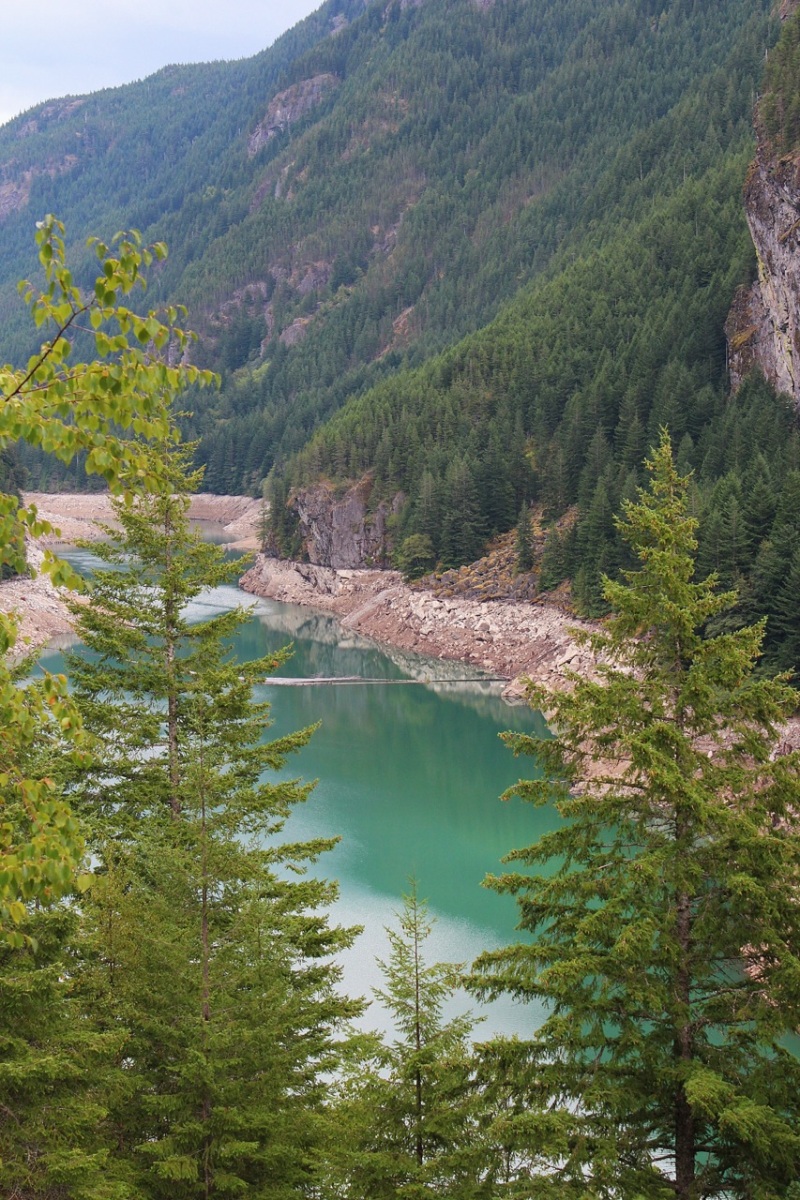 Further west is the company town of Newhalem where Seattle City Light employees live. Here, we could have taken a walking tour or arranged (in advance) a tour of the hydroelectric complex, but time was getting short.

Although North Cascades National Park does not cross anywhere along SR-20, there is a visitors center (near mile post 120). We watched a boring 25-minute video (during which we fell asleep) and took a short interpretive trail, at the end of which was a good view of the Picket Range covered in glaciers.

One final stop we made was the Cascadian Home Farm. While organic produce, mostly blueberries in the summer, can be purchased, the vast majority of people stop here for their delicious ice creams.

We finally got home, stopping for dinner along the way, after a long but fulfilling day.

We’re lucky to have these treasures so close to home. The area is now protected in North Cascades National Park, which is divided into North and South units, intersected by Ross Lake National Recreational Area through which SR-20 passes. Along with Mount Rainier and the Olympic mountains, they are the trifecta of national parks in Washington, all dedicated to mountains and their ecosystems.