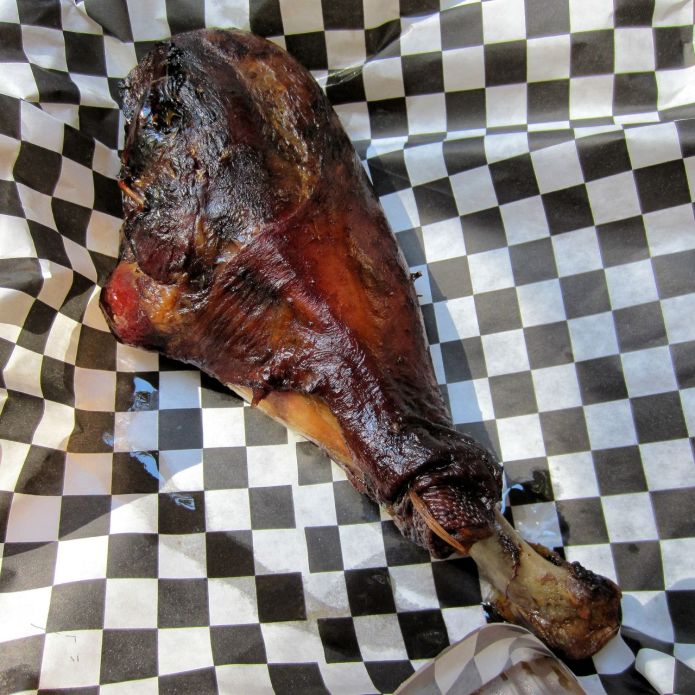 Gobble Express started showing up at the Issaquah Famers Market this year, swapping the sole food truck location every other week with Maximus/Minimus. As the name suggests, Gobble Express specializes in turkey, as does the brick-and-mortar operation, called Gobble Restaurant, in Woodinville. The truck has a more limited menu, including smoked turkey legs. The first time I ever ate one was at Disneyland two years ago, a transplant from Disney World where it has been a huge hit. My gnawing on it must’ve seemed like a Neanderthal moment to my family. In truth, I wasn’t so impressed, the leg meat being extremely chewy and stringy. So it was with a little trepidation that I took my first bite of Gobble Express’ drumstick. Not to worry, it was phenomenal, the meat succulent and smoky and burnished to a rich, dark brown.

Gobble’s motto is You buy, we’ll fly, referring to its flexible catering business. Its drollery and terse rhyme remind me of another local smokehouse, Caveman Kitchen in Kent, whose motto is You choke ’em, we smoke ’em, referring to its side business of smoking any meat you bring them. The similarity doesn’t end there because the skin of the turkey leg is like that of Caveman’s vaunted chicken, very smoky, leathery—and delicious. Gobble Express also sells sandwiches made with BBQ beef brisket, pulled pork and pulled turkey, but the turkey leg is its best seller (☆☆☆☆).