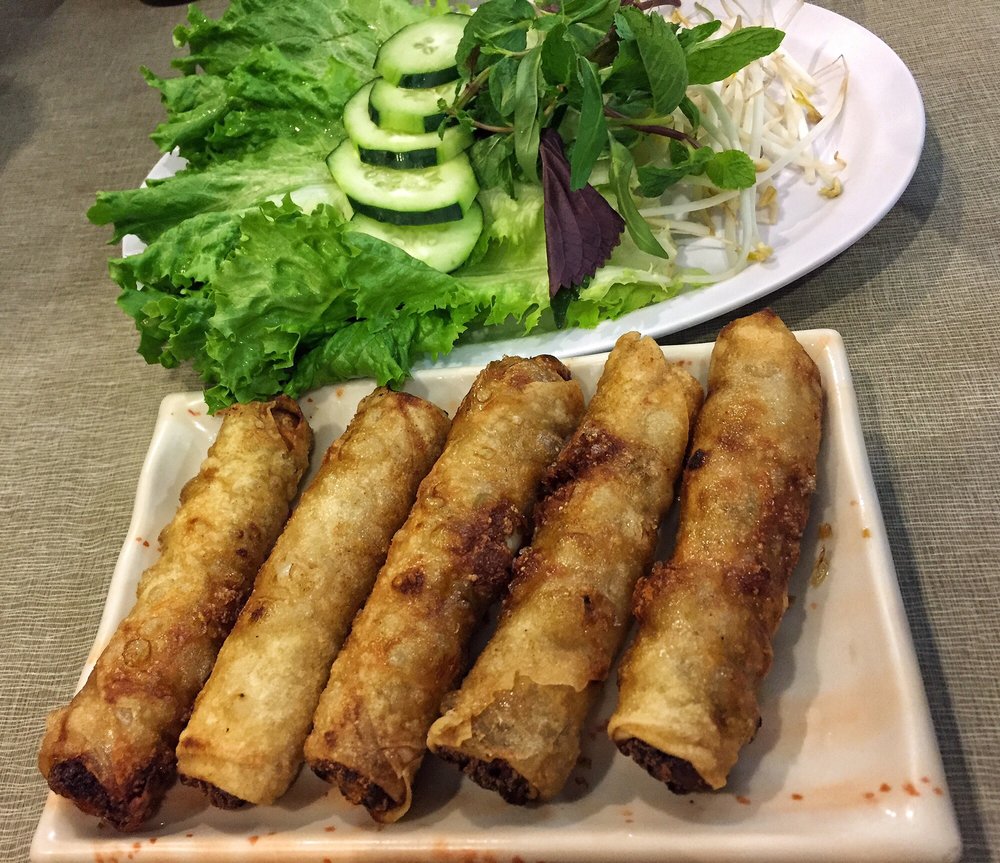 While in San Jose (CA) at a Vietnamese restaurant, friends KirkJ and his wife ordered and loved a specialty that I had never heard of—bánh khọt, that he points out is difficult to find in the Seattle area. It’s apparently equally scarce elsewhere, not as common as its cousin, bánh xèo, whose batter is made from the same ingredients of rice flour and coconut milk. Rather than the omelet-like presentation of the latter, bánh khọt seem like little tartlets, grilled in special cast iron pans that look like Japanese takoyaki or Danish ebelskiver pans. The cakes are a little more than 2 inches across and are topped with some sort of savory filling, usually fresh shrimp or chopped or ground dried shrimp. Bánh khọt are traditionally eaten as breakfast or snack in Vietnam, and by wrapping a lettuce leaf and herbs around them before dipping them in nước chấm. The ideal examples are crispy on the bottoms and edges, but soft in the center. Sometimes, a dollop of coconut cream is spooned or drizzled on top.

Banh khot and banh xeo are wrapped with lettuce leaves and herbs, dipped in nuoc cham

As my wife and I were on our last full day away from home, what better opportunity to try finding bánh khọt than in the San Gabriel Valley, home to many Vietnamese restaurants. A quick internet search turned up Hà Tiên Quán in San Gabriel, apparently the only restaurant that makes them in the valley. A few restaurants in Orange County have them as well.

Even if three of us came for a specific reason, looking over the menu was treading in unfamiliar territory. Some of the standard repertoire of Vietnamese dishes are here, but most of it, written only in Vietnamese and its romanized alphabet, is probably unrecognizable to those unacquainted with the cuisine in and around Hà Tiên in western Vietnam, where the family who owns the restaurant is from.

Bánh khọt and bánh xèo were pictured on the menu right next to each other. We decided to try both. Almost as an afterthought, we also asked for two types of fried spring rolls: chả gìo ré and chả gìo thường.

The presentation of the bánh khọt (☆☆) was striking, cups of yellow shells with an orange filling of what I imagine was ground shrimp. It was hard to tell since I detected no shrimp taste, let alone taste of any kind. In fact, turmeric’s earthy quality dominated. These were not the crisped shells that I was hoping for either, just rice flour’s unmistakable chewiness. I have to say though that the  shells were admirably thin.

Equally disappointing was the bánh xèo (☆☆) that was filled with a mountain of bean sprouts, too much for my liking, and so few shrimp that we all asked, “Where’s the shrimp?” That was it, nothing else. The crepe was also coated with a glistening layer of frying oil. As with the bánh khọt, turmeric broadcast its color and flavor. This dish does not hold a candle to the bánh xèo at Greenleaf in my neck of the woods.

It was fortunate that we added fried spring rolls to our order at the last minute, or the whole meal would’ve been a disappointment. The menu showed four kinds. With no English translation, we asked the waiter what the differences were. What we heard was though the filling was the same (ground pork mainly), the wrappings were different, which the waiter said he couldn’t explain well enough. Chả gìo thường (☆☆½) is the more familiar spring roll wrapped in wheat flour skin, which makes for a very crackly crunch. The revelation was chả gìo ré (☆☆☆) because the wrapping can be an incredibly lacy rice flour netting that is time-consuming to make and therefore uncommon. HTQ may have used a vermicelli noodle shortcut instead. As the waiter said, the filling was made with pork.

It might be a better idea to return here for their regional dishes.

Celebrating our birthdays at Monsoon East may be becoming a tradition. Granted, two years in a row hardly qualifies as an annual observance, but truthfully we couldn’t think of any better special place to be that was within a short driving distance of home. Along the two-block distance on Main Street in Old Bellevue can be found a surprising number of good places to eat, which include not only Monsoon East but La Cocina del Puerco, Belle Pastry, Ginza, Bis on Main and Cantinetta, the last to which we’ve never been.

First came the small plates. Dungeness Crab Rolls delighted us with their crispiness (deep-fried and sliced diagonally) and filling of crab, shrimp and rice vermicelli. These chả giò were delicious by themselves, even without nuoc cham. You could choose to wrap these in green-leaf lettuce leaves, garnished with extra rice noodles and Thai basil, before dipping. A tad greasy, the fried rolls were extraordinarily good (☆☆☆½).

Remembering how good it was last year, we requested Claypot Manila Clams again. To be sure, the clams were tender, but the sauce was an absolute killer, da bomb. Made from tomato purée and other secret ingredients, it was thick, bright, savory, buttery and a little spicy from sliced jalapeños. Even after polishing off roughly a dozen small clams and using their shells to scoop up the broth, there still was more sauce left behind. It would have been a crime against nature to let this go to waste without slathering it on rice, so we declined the waiter’s offer to remove the vessel. This is an astonishingly good entrée (☆☆☆☆), one we’re likely to order time and again.

Next came the rest of the meal. There was the steamed jasmine rice, of course, to mate with the clam sauce. Mustard greens are not normally associated in the West with Vietnamese cuisine, but  Chinese mustard greens are very popular in Asia. At Monsoon, they’re sautéed with roasted shiitake mushrooms and slivers of ginger in a savory sauce (☆☆☆).

Veal Luc Lac is a variation of the more common bo luc lac which is prepared by searing marinated beef cubes in a pan and shaking the pan (luc lac) back and forth until done. One could not ask for more tender meat than Monsoon’s veal version, tasting of oyster sauce, fish sauce and garlic. The red onions were nearly caramelized to heighten their sweetness. The whole dish is seasoned with coarsely ground black pepper that added pungency and floral taste. A small dish of a bracing dipping sauce made with lime juice, kosher salt and pepper sealed the deal on yet another outstanding though pricey dish (☆☆☆☆), accompanied by a salad of watercress and cherry tomatoes, dressed in a refreshing lime vinaigrette.

We’ve come to regard Monsoon East as one of the best Asian restaurants on the Eastside. At their upscale prices, it is not a place we’d go to often or on the spur of the moment, but certainly when our birthdays roll around again next December, we’d be hard pressed to think of a better place.