It’s hard to describe what I felt when I first saw Chefchaouen. It’s like no other town I’ve ever seen, a city awash in blue. Some say it’s the color of the sky or the Mediterranean, but the hue is neither.

My first view was from a highway overlook outside the city. From there, one could have the impression that only the roofs are blue. In another half hour, I was in the medina where all travelers who’ve put Chefchaouen on their bucket list know that blue is everywhere—the walls, roofs, stairs, pathways. Mind you, not everything is blue but enough to think that it is. And some of the blue is a different shade.

Is this some kind of touristy gimmick? Actually it’s been this way since the 15th century. Several theories try to explain the color’s historical origin. One says that it’s to ward off mosquitoes that avoid clear water. None makes more sense to me than this. When Jews and Muslims came here after being expelled from Spain by Ferdinand and Isabella, the blue color was a combination of their preferred colors, blue and white. To this day, white and blue paints are mixed. When I looked closely, it was easy to see that the paint was not uniform.

Chefchaoen blue is a mixture of blue and white paints

The residents apply the paint twice a year. We came across ladies who were hard at work, tourists gathered around them to watch. 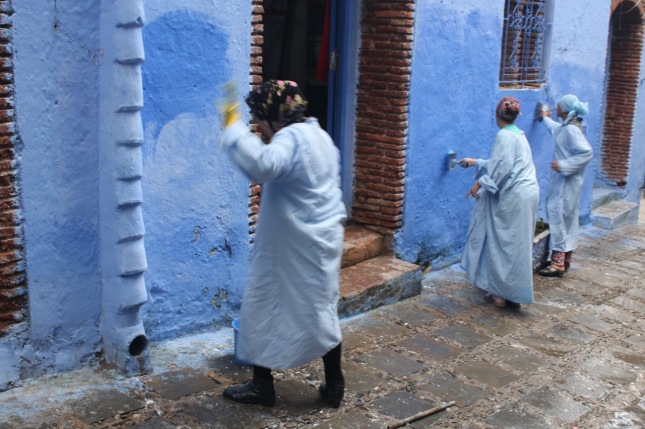 If they don’t make the effort, in a climate of fog, rain or snow, nature will take its toll. The paint will flake off, algae and mildew will take over. 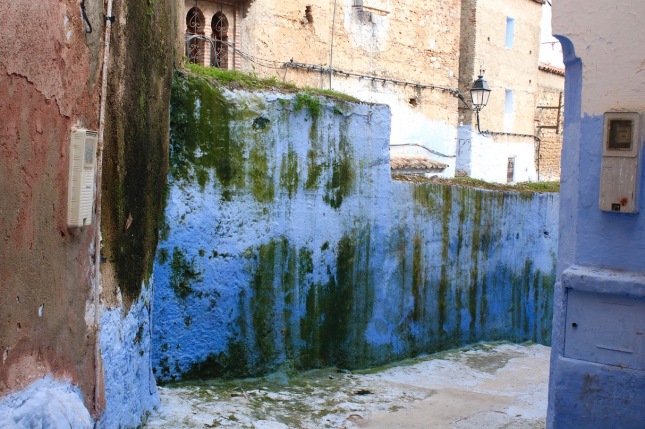 Algae growing on part of the old medina wall

Located on the foothills of the Rif Mountains, it’s not unexpected that walkways and alleys of Chefchaouen are sloped. The steepest grades are traversed by stairs. Surfaces of rocks filled in with cement were made by captured Portuguese sailors who were attacking the seacoasts of Morocco.

Because the pathways are not in a grid pattern, it’s hard to make any sense of their arrangement. Even wandering through the medina close to our riad got us briefly lost until we stumbled on the main road.

This is the outer Chefchaouen. To get a better understanding of its soul, we took two personalized guided tours.

The first one, led by Mohammed, took us into the hillsides that surround the city. Here I could better see the topography, rocky and surrounded by mountain, better able to defend itself against foreign invasion. As we climbed the trails, a fog was lifting, a common weather phenomenon.

Soon, we arrived at the Spanish Mosque that was built by the Spanish colonialists in the 1920s for the benefit of the locals. But the people wanted nothing to do with this carrot and never used it. Today, the site is popular for its spectacular view of the town.

Chefchaouen from the Spanish Mosque

All over, the hills were covered with agave and prickly pear cactus, to me an odd juxtaposition with olive trees. All these are used by the local people. It was surprising to me that all kinds of cured olives are served at virtually every meal, including breakfast, and it’s not uncommon to see bottles of oil at restaurant tables to be used as condiment. We even passed an old, still-used stone mill composed of a bowl-like basin and a giant round millstone that is pulled via axle by donkeys in a circle. 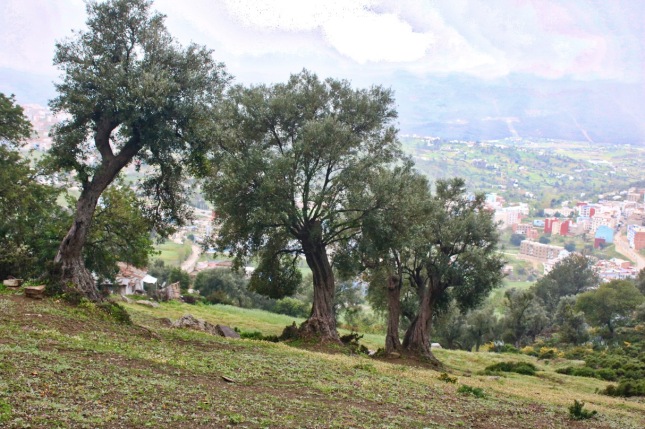 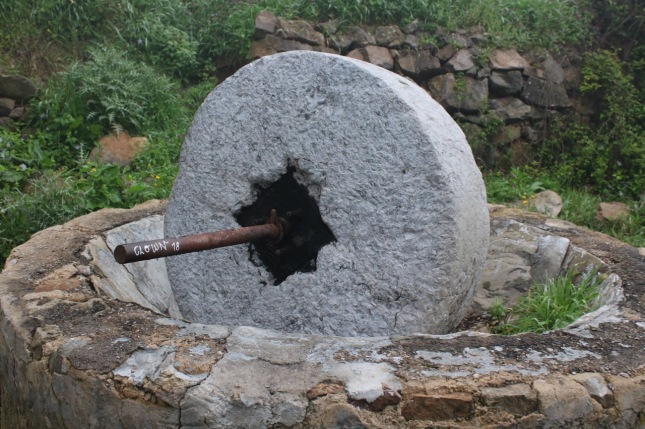 Sharing the trail with us today were women who were carrying down bottles of goat milk on their backs to sell in town and marathon runners who somehow managed not to fall down on the rocky surfaces made wet by fog.

The second tour was historical in content. Abdul Salaam seemed like an unlikely guide, wearing a soft white djellabah, white fez and saffron-colored babooshes and looking to be at least in his late seventies with a stentorian voice that could easily be heard by a hundred people. He described architectural elements in the medina and educated us in another form of Islam, Sufism, which is more mystical and loathed by extremists. 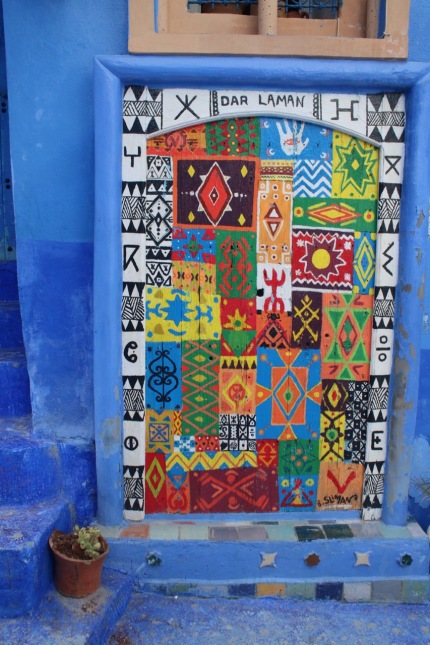 There are 14 zaouias (religious schools) in Chefchaouen. Abdul also took us to a structure with a communal oven where women can bring their unbaked items which the baker will slide into a wood-fired oven on trays. Most households in the medina don’t have an oven.

Regardless of how it got its blue paint job, Chefchaouen is drawing more tourists than ever before. Like struggling communities everywhere, tourism is a boon to the economy, which will likely change its quaint character forever. Foreigners on motorcycles now roar down the narrow streets where only feet trod before and younger Moroccans from out-of-town beat drums and sing and dance loudly, annoying the locals. This is a shame because Chefchaouen is the most beautiful of towns, possibly the most beautiful in all of Morocco.