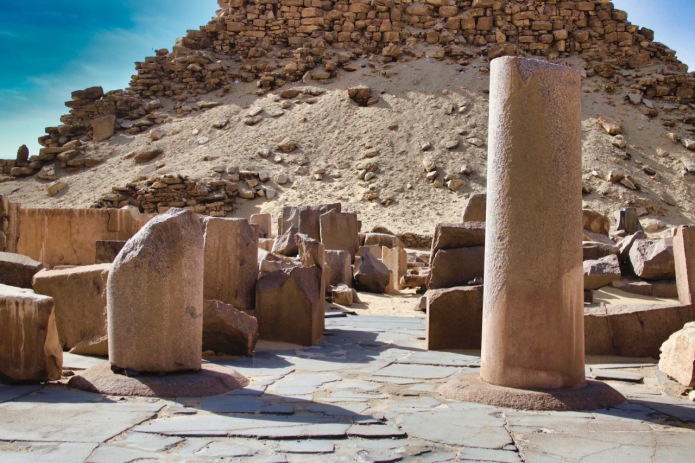 The sites of Abusir and Abu Ghurab are located not far from Cairo. Pharaohs of the 5th dynasty built their pyramids and temples there. While the quality of pyramids was quite inferior to Giza’s, archaeological finds were important, including papyri that are the oldest ever found. Although not of primary importance to archaeologists (or because they can’t convincingly explain them), also discovered was evidence of the kind of ancient Egyptian technology that is difficult to explain. Those found at the Sun Temple of Niuserre at Abu Ghurab represent some of them.

Our tour group was scheduled to visit the temple, built to worship the sun god Ra. Apparently, we got permission to visit beforehand but when we arrived, the authorities changed their mind. Whether it was last minute or not wasn’t clear, nor was the reason. In Egypt, this kind of baffling decision can happen at any time. As a substitute, we were allowed to go to the nearby temple of pharaoh Sahure at Abusir. I was disappointed about Niuserre because I wanted to see evidence of reported advanced manufacturing technology at the site, specifically precision crafting of sandstone ‘basins’ and an alabaster ‘altar.’

We had no choice but to accept the decision. But, I didn’t expect to be surprised by the alternative.

At Sahure’s temple, the evidence of catastrophe was all around. Giant limestone and granite blocks of stone were scattered everywhere, columns broken in pieces, a mishmash of stone material that seems as if some titanic force tore everything apart. This doesn’t look at all like a simple case of defilement. The only columns left standing are two adjacent to each other made of Aswan red granite.

These strewn fragments are thought to be parts of the temple walls. I thought it was curious that the floor made of polygonal slabs of basalt has not suffered as much destruction.

As I wandered through the debris, I noticed granite pieces which to the touch and naked eye seemed to have perfectly flat surfaces.

There was also a fragment of a rosette-shaped column of six ‘petals.’ The curiosity is why a petal’s cross section isn’t a circular arc. Instead they have a more complex shape that seems to mimic a fuller version of the vesica piscis.

Most unbelievable of all were tubular holes in granite stones. One stone had two holes of possibly the same diameter.

When I looked inside one, the surface was finely grooved in a (presumed) spiral which means it wasn’t chipped out with chisel and hammer, rather appearing to have been ‘drilled.’

How is any of the above explained other than allowing for advanced technology that the builders used but has (unfortunately) been lost to us?

One final curiosity was a stone basin at the edge of the temple floor. Aside from its being symmetrically shaped with a refined rim, it looked like a catch basin for water or other liquid fed into it from a pipe that was laid underneath the basalt floor. There may have been others, but I didn’t see them.

In the end, the stopover at Sahure’s complex was as interesting and provocative as the one to Niuserre’s would have been. With the destruction and apparent evidence of machining, I just wondered what the hell happened here.