“It doesn’t get any better than this.”

So beamed the driver to a passenger on the park shuttle to Logan Pass. “I love this job,” he added, admitting he’d been doing it for many years and still amazed by the mountainous spectacles he sees day in and day out. You can imagine the effect they have on first-timers, like me, wowing us with mouth-dropping views spread over a million acres.

It wasn’t too long ago that visitors to Glacier National Park were able to see many more glaciers than today (150 recorded in 1850), which surely heightened the dramatic impact. But, global warming has been taking its toll here as elsewhere, to the point where the vestiges of 26 remaining glaciers will disappear by 2030, a mere thirteen years from now. Just before our arrival, temperatures had been in the 90s for two straight weeks.

Even with this unfortunate circumstance, the park will continue to draw ever more visitors, easily 3 million last year, with more expected this year. And why the popularity?

There are unparalleled vistas for sure. For me, it’s the dramatic shapes of these mountains, like Mount Grinnell or Mount Clements, standing solo, with knife-edged ridges or pyramidal shapes, thrusting up thousands of feet. The most popular way to see many of them is along the famous Going-to-the-Sun Road, 50 miles of thoroughfare into the heart of the park. Its narrow width at precipitous heights and switchback course demand that you drive slowly and attentively. Many drivers are intimidated by fear of heights or congestion. For those who aren’t, chances are high that they won’t find a parking space at the most popular stops, like Avalanche Creek and Logan Pass. Visitors may choose instead to take the free park shuttles that deliver them to various stops along the road or, better yet, to take the famous Red Buses (not free), vintage buses originally introduced in the 1930s and since restored (and updated) by the Ford Motor Company.

I was too late to reserve any red bus tour, so we took the shuttle on the first day. We waited in line at the Apgar Visitor Center for 1.5 hours, a real test of patience when I wanted to maximize my park experience.

When we got to Logan Pass, the triple continental divide and highest point (6646ft/2025m) reachable by car in the park, the fields were covered in wildflowers, especially glacier lilies, and a mountain goat, marmot and ground squirrel made brief appearances.

Mountain goat in a field of glacier lilies, Logan Pass

The following day, I did drive on the Sun Road to get from West Glacier to East Glacier. Not a problem, though I had to keep my eyes fixed on the road. Fortunately, there were many pullovers for gawking at one breathtaking vista after another, the contrast between towering peaks and glacier-carved valleys, waterfalls tumbling over jagged rock, wildflowers in abundance.

The most beautiful sight, in my opinion, is the one from Many Glacier Hotel that looks out over Swiftcurrent Lake at Mount Grinnell and its neighbors. It would be grand to have this view out the window of one of the hotel rooms, but the privilege would cost you a pretty penny, in the neighborhood of $220 to $460 per night, depending on type of room, less for rooms with no lake view.

Spectacular in its own way is Highway 49 that originates from East Glacier Park northward. It too is a two-lane winding road that joins Highway 89 along the eastern edge of Glacier.

National parks are more popular than ever, Glacier included, but they are challenged to handle the growing attendance and to fix their crumbling infrastructure. I had to maneuver carefully over and around lots of potholes on the road to Many Glacier. Parking lots are routinely filled to capacity. I had to pass up several along the Sun Road nor could I park at the St. Mary Visitor Center. The free shuttle system is scrambling to handle the expanding number of riders. Some of the more popular trails are abundant with hikers. These are the unfortunate realities nowadays.

Despite a list of mounting problems, I highly recommend a visit to Glacier National Park, but during the summer months, be sure to reserve your room (and red bus tours) well in advance and be prepared for a human onslaught. 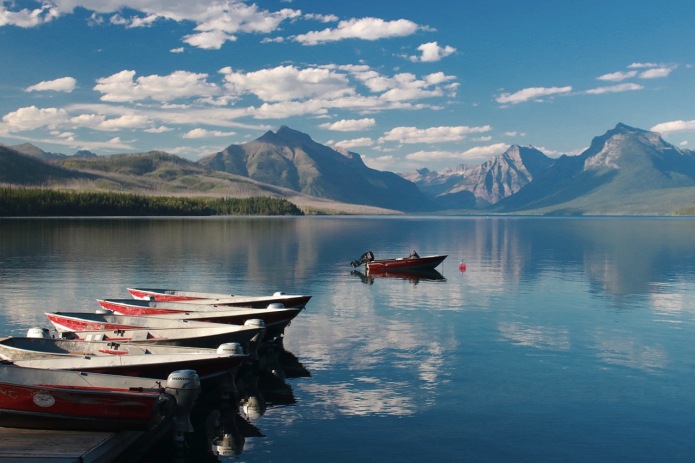 How much more reward could I get when I first got to Glacier National Park than to have this view just steps from my room? Lake McDonald was only a teaser for the best was yet to come.