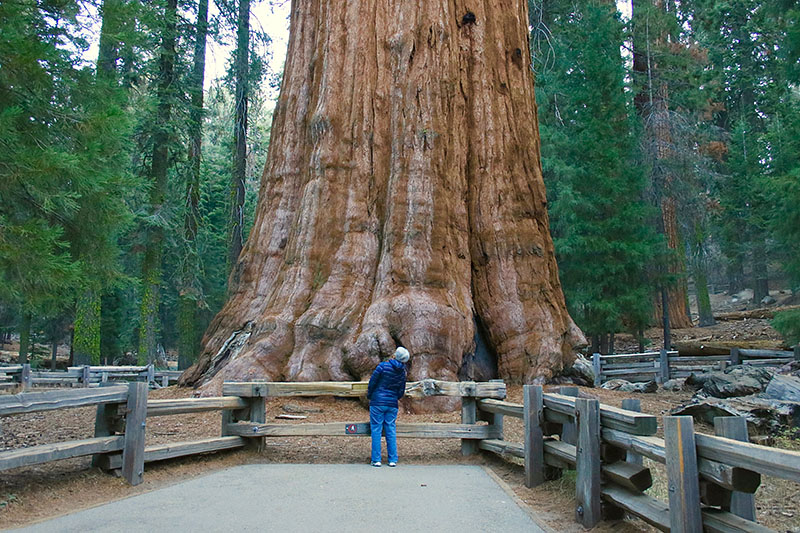 The park ranger held it up between her thumb and forefinger. It was a mere two inches long.

“This is a sequoia cone.”

Behind us was a colossus, the General Grant sequoia, the second largest in the world and located in Kings Canyon National Park, standing at a prodigious 268 feet in height. That a seed from a cone can produce one of these giants is one of nature’s wonders.

The word majestic doesn’t enter into my vocabulary often. I seem to use it when I travel because of amazing things I see. It’s even more rare for me to apply it to a living thing. The giant sequoia (Sequoiadendron giganteum) is one of them, a tree so massive and tall that on first sight you’re likely to be left speechless, in awe. Today, they are endemic only to the western slopes of the Sierra Nevadas in California.

The ranger continued to describe additional interesting facts about the tree as well as its historical and political importance. The sequoia isn’t the tallest tree. That distinction belongs to its cousin, the coastal redwood (S. sempervirens), though the sequoia’s height is no slouch, mature specimens reaching 250ft or more. But by the sheer volume of its height and massive, slowly tapering trunk bottom-to-top that can reach 20 feet in diameter, it is earth’s biggest tree. When looking straight up from the base, I was unable to appreciate its relative size.

However, on the Giant Forest Loop, I got to see just how big it is in relation to us mere humans. 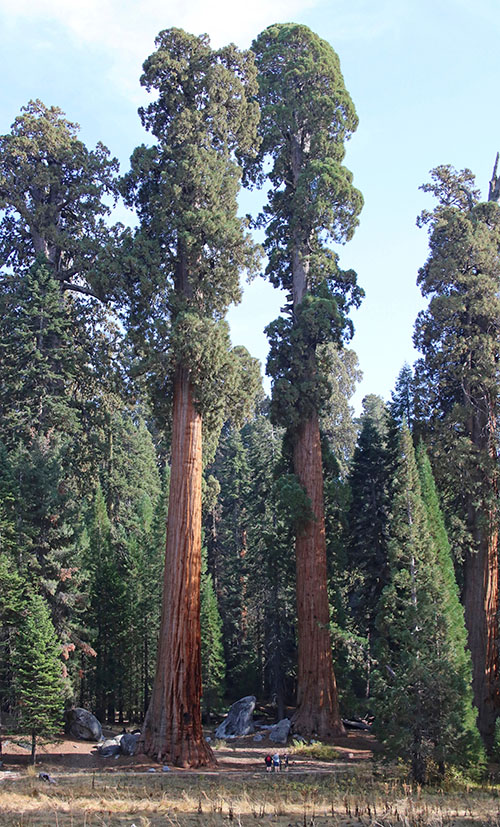 There’s another impressive attribute. At Sequoia National Park’s General Sherman Tree, I pondered its extreme age, estimated to be 2,100 years old, earth’s largest living organism. At the signing of the Declaration of Independence, it would’ve been 1,850 years old. When it was just a sapling, Caesar would’ve uttered his mortified words to Brutus. These trees are some of the oldest living things on earth. There’s no telling how long they can exist if left unmolested. Some are estimated to be over 3,000 years old. (BTW, if that age astonishes you, the oldest living bristlecone pine, also found in California as well as Utah and Nevada, is estimated to be more than 5,000 years old, making it more ancient than The Great Pyramid of Giza.)

Here’s a curious fact. The longer a sequoia lives, the better it’s able to defend itself against intruders. Tannins will foil bugs and fungi and the thick bark and resin-free sapwood will hinder fires. Lightning can scorch the tree, blackening the exterior and core, but the sequoia remarkably heals itself. I should be so tough in my golden years.

For all its hardiness, the sequoia is defenseless against humans. Some very large specimens were cut down in the latter half of the nineteenth century. What it took for a tree to grow in excess of a thousand years was undone in three weeks by two-man saw and axe. Even in the age of Manifest Destiny, people were outraged that trees much older than Methuselah were destroyed. Many stumps can still be seen along the Big Stump Trail in Kings Canyon.

The fight to save the sequoia was so seminal to the conservation movement and establishment of our national park system that the ranger I mentioned above informed us the sequoia cone symbol appears on every Park Service ranger’s hat band. I will be sure to look for it when I visit the next national park.