It’s like walking on a waterbed. Unnerving at first, there is a definite squishy firmness under your feet as you walk on an island made entirely of totora reeds, so thick that there is no danger of falling through into Lake Titicaca. Even so, the feeling that water is underfoot never leaves you.

Lake Titicaca is an incredibly large lake at over 3,200 square miles (8,300 km2). It is the mythical birthplace of the Incas, the progeny of Manco Capac and Mama Occllo, and straddles both Peru and Bolivia. 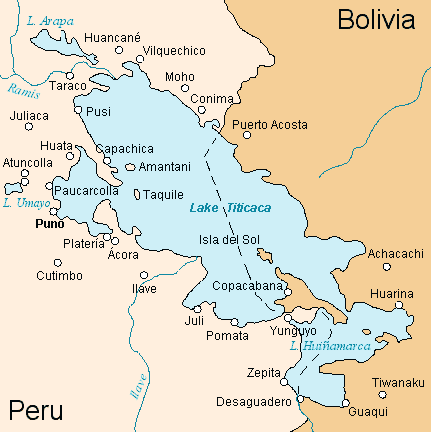 The Uros people have been living on these floating islands for centuries. It’s thought that the idea arose because the Uros wanted to escape marauding enemies like the Incas, which explains why there are still watchtowers on many of the ninety or so islands. This strategy couldn’t have been successful because the Uros were subjugated anyway. Really, how can you escape a determined army by isolating yourself on a tiny island? But their culture and way of life endured.

Historical necessity aside, these islands are really remarkable. Everything is made of totora reeds, including the homes that sit on them, as many as ten on an island, and the double hull boats that have an uncanny DNA to those of ancient Egypt and Easter Island. The reeds grow abundantly in the lake. Because most of the buoyant reeds are underwater, they rot quickly, so there is the almost perpetual need to overlay existing layers with a new one, as often as every two weeks.

Rotting reed foundation needs to be topped with a new layer often.

I made arrangements to visit the islands through my hotel, a tour that also included a stop at Taquile Island, but you can walk right up to the boat launch area in Puno and purchase tickets. You can also arrange for an overnight homestay. The Uros have been receiving tourists for a while now. It has gotten to the point where it seems there is inordinate reliance on visitors to supplement their income. Another way to put it is that tourism has changed their traditional way of life, for better or worse. Tourists come in droves, transported by commercially-owned motor boats or community-owned ferries to one of the participating islands.

I was bothered by aspects of the experience. It had a certain staginess and smacked of commercialism. It started, in our case, with just the resident women waving at the incoming boat, all in a line along the dock. Later, after a presentation by the men on how the islands are constructed, each lady selected a group of tourists to come into her home where she asked each guest his or her name, where each was from, did some chit-chatting, hoping to establish a ‘connection’ before the Big Sell. This is when the hostess displayed her wares for sale, woven tapestries, trinkets, dolls, even little model boats made from the reed. When you’re a captive audience, it’s hard to say ‘no.’

There was the opportunity to take a ride on one of the marvelous boats, in our case, a catamaran flanked by two traditional double-hulled boats. But the privilege cost each of us S/10, which wasn’t voluntary.

Before the tour moved on to Taquile Island, the passenger boat made one more stop for tourists to get an official Uros Islands passport stamp. I was surprised (or maybe not) that it cost S/1.

Granted the amounts I’m talking about didn’t break the bank. At the going exchange rate of $1 = S/3.4, we’re talking peanuts here. Should I have just sucked it up? Maybe so. It’s just the idea of having to shell out for every little thing through pressure, guilt or obligation.

Let’s be clear though that tourists are the ones who created the demand, who are intruding on the lives of the Uros. Who can blame the latter for improving their lot? Ironically, there’s no doubt that the ability of the Uros to lead a traditional way of life has been changed, maybe forever. There are families who still refuse to be bothered by tourists. They are fending off the new ‘Incas.’