There’s nothing like the promise of a beautiful day, after an extended period of wet weather, to stimulate the desire to do something outdoors. Last Friday was such a day. We decided to hike on the Little Si Trail near North Bend, which strangely we’d never done for all the years we’d been living in western Washington.

The trail is very popular among locals who appreciate that it’s open year round. At 1,400ft, it isn’t very high, easily dwarfed by the peak next to it, Mount Si at 3,900ft and open only 7 months out of the year. Popularity is further bolstered by the trail’s moderately difficult designation, while Mount Si’s is rated as difficult. Still, the hike is not like a walk in the woods, rising about 1,100ft above the trailhead and the most strenuous parts being at the beginning and end of its 2.2-mile length over relatively steep, rocky surfaces.

The biggest challenge for my wife and me was our lack of conditioning. By the end of the hike, my legs and knees were aching, back and butt seeking cushion and the rest of my body craving ice cold beer. 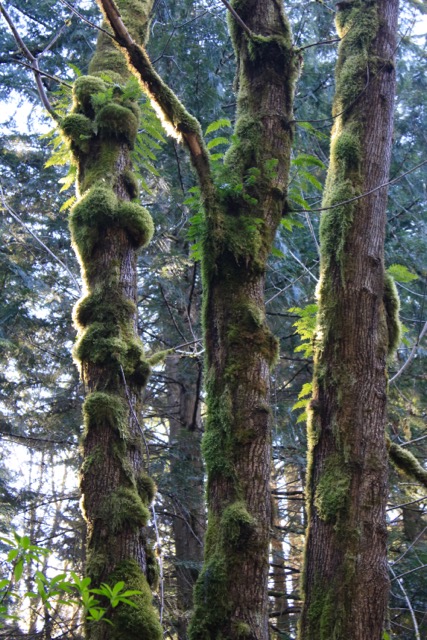 Impressive also are occasional glimpses of gigantic boulders, some in spectacular heaps, some huge and monolithic, covered in mosses and ferns.

As with any mountain trail, the surface is uneven not only from rocks but exposed tree roots that are easy to kick, especially by tired legs.

Clearings at the summit reveal Mount Si and the broad Snoqualmie Valley below.

At the summit, you can rest to your heart’s content on the bare rock exposures and bask in the sunshine on a clear day or shiver when the winds blow. It took us four hours to make the round trip, including rest at the top. If we’d been any younger or in better shape, it surely would’ve taken less time.