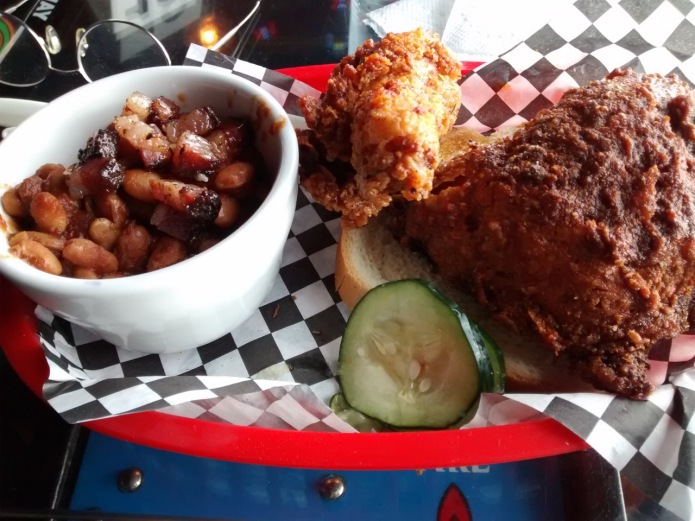 I don’t know if Nashville, both the city and its food, has suddenly become trendy, or not. Articles about it seem to be appearing in print and digital media wherever I turn. Could it be that I’ve become more attuned to these write-ups because I had just been there last year (and loved it)?

While the Grand Ole Opry and country music need little introduction, Nashville’s hot fried chicken, its homegrown grub, is becoming a hot food topic. Even the colonel jumped on the bandwagon. The chicken is not for the faint-hearted, a blistering recipe of bird, buttermilk, herbs, spices and staggering amount of cayenne pepper. I suspect the real thing will never go mainstream, only a wimpier version of it. I made the ‘mistake’ of ordering the extra-hot chicken at Bolton’s Spicy Chicken & Fish in Nashville and paid the price, both before and after. If you read what gasping fans have to say, the reaction is pretty much the same. The whole point IS to suffer pain, metaphorically to hit your head with a hammer because it feels so good when you stop. The legendary endorphin rush. I can tell you that my body hasn’t evolved to that exalted plateau. After Bolton’s, I had to adjust the spice level at Prince’s Hot Chicken Shack (the restaurant that started it all during the Depression, see video below) to medium and was able to taste the chicken while still breaking out in a sweat. Would I ever have this kind of chicken again post-Nashville?

Most recently, KFC added Nashville hot chicken to its menu. This is a non-starter for me. So it was with more than passing interest that I read that Sisters and Brothers officially opened for business today (March 25), specializing in none other than Nashville hot fried chicken. And who should run the place but Nashville proprietor Jake Manny who still owns The Crying Wolf, a bar with live music that also serves food, mainly burgers. And it’s located only blocks away from Bolton’s. I find it uncanny and coincidental that the interior of S&B has a similar interior paint scheme as Bolton’s—black and red.

Sisters and Brothers is located in the up-and-coming food area of Seattle called Georgetown, right next door to Charles Smith’s winery that relocated from Walla Walla. Parking is very limited. The stand-alone building used to be occupied by The Runway Cafe where I’d once come many years ago when I worked nearby. The restaurant was so named because you could watch airplanes, including Boeing jets on test flights, land at Boeing Field just to the south. It appears S&B kept many of Runway’s furnishings and paraphernalia, including old pictures, decals, posters and such, and even sells locally beloved Rainier beer in cans.

The menu is short, written on a blackboard just to the side of the fully stocked bar, where you place your order. You’re given a number and take a seat. Just as in Nashville, it takes a little while to get your chicken; they’re all made-to-order.

You have a choice of four kinds (light meat, dark meat, half bird or tenders) and four levels of spiciness: naked (no added hot spice), mild, hot or insane. I ordered dark meat ‘hot.’ There was none of the full frontal sensory assault that I’d expect from anything labeled ‘hot’ in Tennessee. There was some burn surely, but not enough to make me wince. Even so, spiciness accumulated with each bite, but still not Nashville-hot. Maybe the ‘insane’ is different. A very light dusting of flour made for an exceedingly crispy skin that nicely soaked up the flavorful spicy sauce.

The problem I had with the chicken was the meat itself. Brined in buttermilk for two days, it was juicy but wasn’t fried enough, the thigh and drumstick beyond pink but having that unpleasant raw texture. Tender, it was not. Let’s hope the kitchen improves this in the future. Prince’s spiciness infused the entire chicken, while S&B’s seemed under-seasoned, although the sauce itself was zippy and salty enough. As is customary, the chicken is served with a slice of white bread (dry) and pickles. Nashville pickles are sour, S&B’s are bread and butter, which I confess I prefer. For Seattleites, the chicken here is a good introduction to Music City’s pride and joy but at this point won’t oust Nashville’s best (☆☆½).

One of the sides is Barton’s Baked Beans, which had the potential to be one of the best I’d ever eaten if they hadn’t been undercooked, a bit hard and chalky. Again, opening day fumble? Thankfully they’re not as sweet as most baked beans, almost sauceless, and the bacon chunks added great flavor (☆☆☆). The cole slaw, meh (☆☆).

The kitchen has seriously slipped since my last visit. The meat was still under-seasoned and the batter has become a liability. It was so thick and crunchy that it pulled away from the meat. It became an unwanted focus of attention. More than that, the hot sauce seems to have picked up sweetness that Nashvillians wouldn’t recognize. Is this the way Seattleites prefer it? The wonderful baked beans is no more, not having gained any traction among customers.

I no longer recommend this place. My friend I came with would also agree.