Few would argue Hurricane Iniki was nothing less than a horrible natural disaster. It struck mainly the island of Kauai in the summer of 1992, leaving behind a path of destruction and caused almost $2 billion in damage. It was the most powerful storm ever to hit the Hawaiian Islands in recorded history, becoming a Category 4 hurricane with sustained winds up to 145 mph.

The Garden Isle is known for its reddish earth. The iron oxide in it literally rusts from the prodigious rainfall that typically befalls Kauai. The soil is responsible for giving Waimea Canyon its distinctive color. In fact, waimea in Hawaiian means ‘reddish water.’ 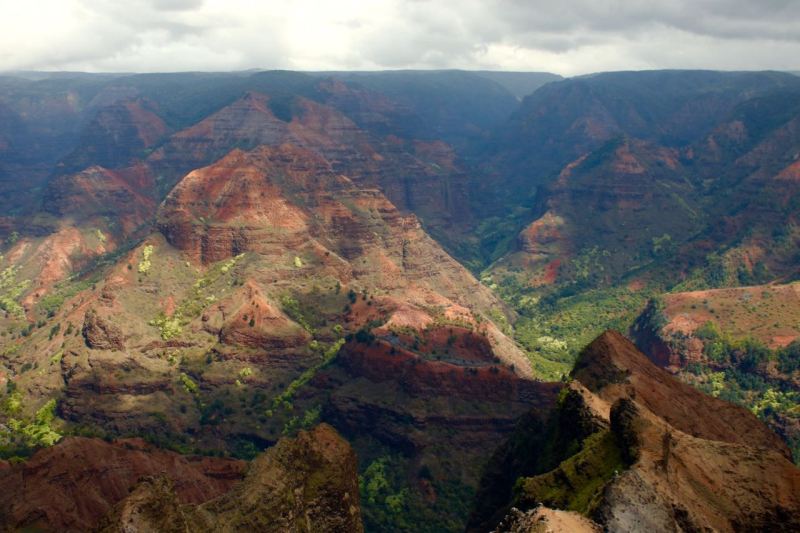 The rust can perniciously and permanently stain furniture and carpeting. For that very reason, the townhome where we were staying asked guests to remove their shoes before entering. The soil can also tarnish clothing, as a silk screen company discovered when its inventory of white T-shirts was ruined by Iniki. But, as they say, necessity is the mother of invention. Shrugging its shoulders, the company decided to use the red dirt as a dye. The shirts became an instant success, the company now called Red Dirt Shirts. Would you believe that one bucket of dirt is enough to ‘stain’ 500 shirts?

Visitors will see these shirts all over Kauai.

That’s not all they’ll see. Strange as it seems, there are wild roosters and hens all over the place—yes, feral chickens. Brightly colored, they make you wonder where they came from. When Iniki laid waste to Kauai, it tore apart the island’s chicken coops and loosed the birds into the wild. They’ve been proliferating ever since, now numbering in the thousands. Generally, islanders ignore them though some regard them as pests. Others have suggested that the chicken be Kauai’s ‘official’ bird. If nothing else, they feast on Kauai’s giant centipedes about whose sting famous island tour book author Andrew Doughty writes in The Ultimate Kauai Guidebook: “You won’t die (but might wish you had.)”

I know I was bowled over when I first laid eyes on Waimea Canyon more years ago than I care to count. I was no less impressed when I saw it again yesterday. Nicknamed Grand Canyon of the Pacific for obvious reasons, it is a testament to the power of water erosion and faulting. The view above is from the Lookout in Waimea Canyon State Park. Waipo’o Falls can be seen at the extreme left.

I’m not surprised, but it was inevitable that public fear of the Zika virus has caused heightened fear of dengue fever in Hawaii. I saw a poster (below) at Lihue airport in Kauai yesterday that gave pointers on how to eliminate mosquitoes to protect against dengue, transmitted in Hawaii by the two mosquito species that transmit Zika. Like Zika, dengue has been around for a very long time. Alarming also is that there has been a recent outbreak of dengue on the Big Island. 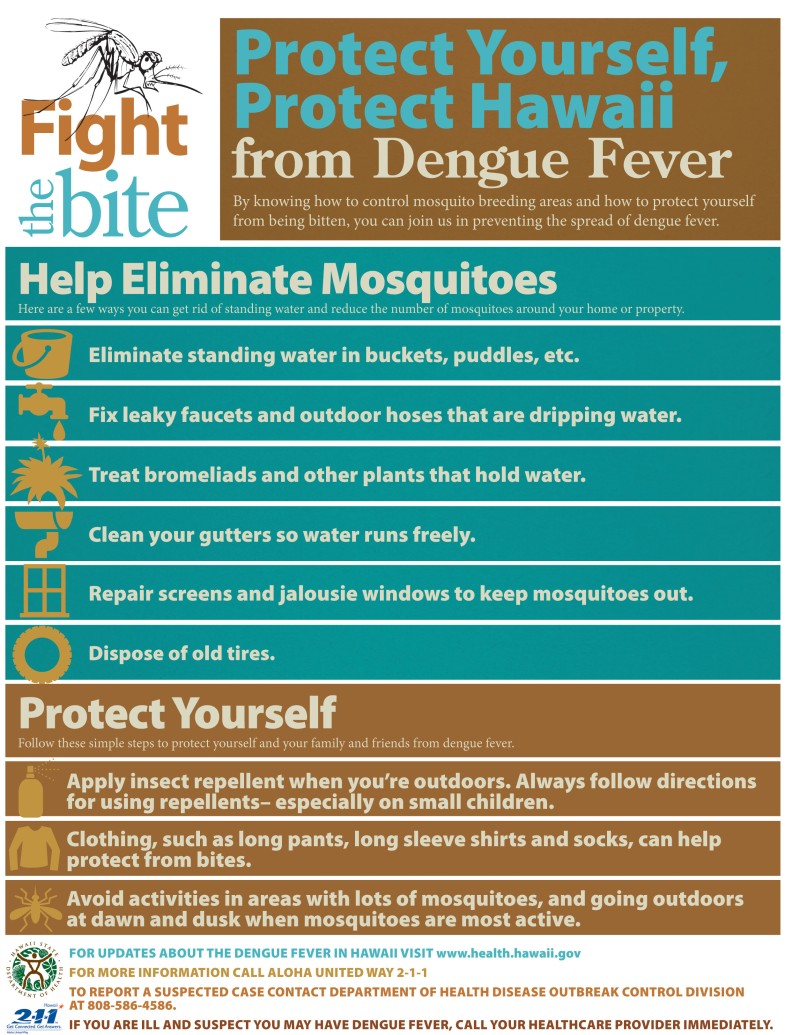 It had the effect of a Trump speech, a shocking announcement on seattlemet.com that Chef Mutsuko Soma would be leaving Miyabi 45th on February 13 to enjoy motherhood, with no definite plans for her return. By the end of the piece, pursuant to the Donald’s pronouncements, I felt despair. Okay, so the simile is as thin as hand-pulled noodles but, hell, handmade soba would disappear maybe forever, it turns out not only from Seattle but the ENTIRE West Coast, according to Seattle Met. One would think that the Bay Area, Southern California, Portland or Vancouver would produce SOMEONE of equal caliber. Faced with Chef Soma’s imminent departure, my wife and I decided to head to Wallingford today for one last soba meal.

It was natural to bring up the soba question with our waitress. It turns out the Seattle Met piece was not as dire as its first reading sounded. Yes, it’s true that Soma would be leaving Miyabi 45th and that her soba would be leaving with her. It’s also a fact that she is not scheduled to return. But, soba will continue to be offered at the restaurant, although not in its many variations. A new chef from the Southcenter Miyabi, Masa Ishikura will be taking over. If it’s so difficult to identify another soba master on the West Coast, where will the soba come from? Seattle Eater says that sous chef Joey McGregor will apprentice at a restaurant in Japan.

In any case, I enjoyed the chyashyu seiro soba again (here’s my previous review), as deeply a satisfying noodle dish as anything I’ve had, without doubt the best soba I’ve eaten ever. This time though, the pork slices (chyashyu) were quite chewy, a chore to cut into smaller pieces with only mouth and chopsticks, a huge lapse in quality control. But the noodles and broth were as legendary as ever. 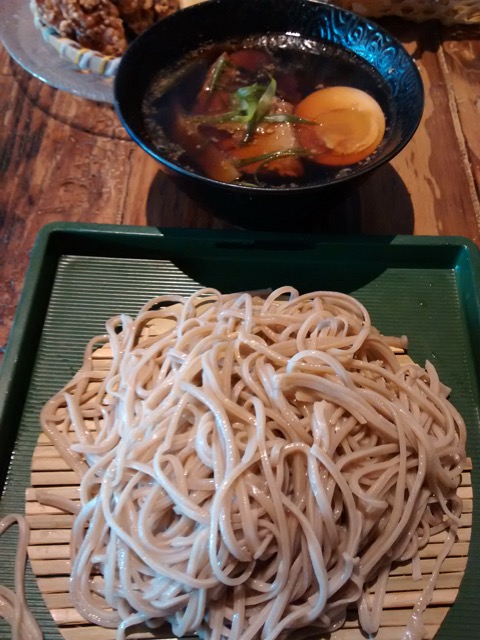 We also ordered chicken karaage. Right off, I’ll say that this is a superb version (☆☆☆☆). The chicken thigh pieces were succulent, made tastier by having spent time in a marinade. What catapulted the karaage to super-stardom was the thin, light-as-a-feather crispy and virtually greaseless batter, most likely made with potato starch (katakuriko). An unconventional but inspired aioli came on the side. 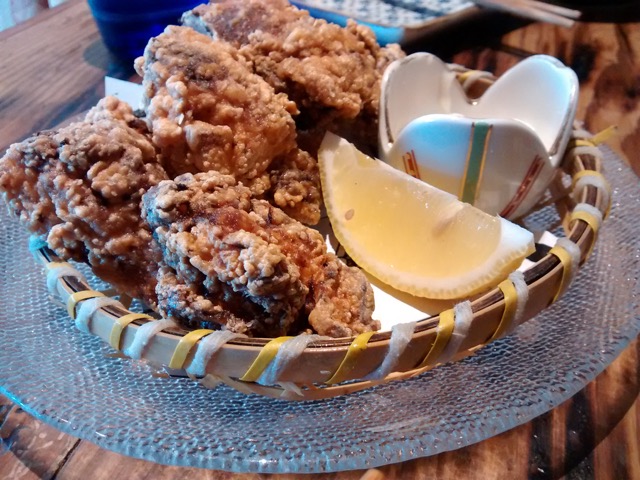 Will Miyabi 45th continue to attract devoted fans? Only time will tell.