When Chef Angus An used tamarind sauce and palm sugar to make pad thai, Thai food lovers in Vancouver were introduced to an authentic flavor. There was no ketchup (or peanut butter). The striving for taste authenticity while using local ingredients has been a hallmark of An’s. He’s also a perfectionist who would go to great lengths to get the ‘right’ ingredients, such as importing lemon grass from Thailand rather than using a less satisfactory one from Mexico. When he opened Maenam in 2009, accolades were quick to follow, including from fellow chefs and Vancouver Magazine, which annually rated it among the top Thai restaurants.

Chef An grew up in the area (graduated from UBC), got trained in classical French cooking techniques (French Culinary Institute) and did his apprenticeship at restaurants in London, Montreal and New York City. But, he (and his Thai-born wife) decided to return to Vancouver, and opened Gastropod, a fine-dining (and expensive) destination—think molecular cuisine (ugh)—which they both shuttered when the economy turned sour. That’s when the idea of Maenam was conceived, a place for more affordable yet high-quality Thai food to fill what they both perceived as an authentic Thai restaurant gap. It’s revealing that Maenam is not located in the downtown Vancouver core but rather the more modest Kitsilano district, just south of Granville Island.

The concept is to feature the bounty of British Columbia in Thai cooking, whose pairing may seem odd at first. So while An might import much of his produce from Thailand (up to 150 pounds per week), his proteins are local—sturgeon, black cod, salmon, Dungeness crab, Humboldt squid, mussels, mushrooms, four-hooved animals (including lamb), chicken. You get the idea.

Because my wife and I were on Granville Island today, we thought we’d go a bit further to Maenam for lunch. (There is no special lunch menu, only a subset of the broader dinner menu at the same prices.)

The outside is unassuming, looking like any other restaurant along the busy West 4th Avenue corridor. Upon entering, you walk into a tiny waiting area that opens up on the left into a refined minimalist interior of wooden floors, burled wood tables, black chairs, pinkish-purple paint on the walls and ceiling. A full-service bar lines most of the eastern wall. 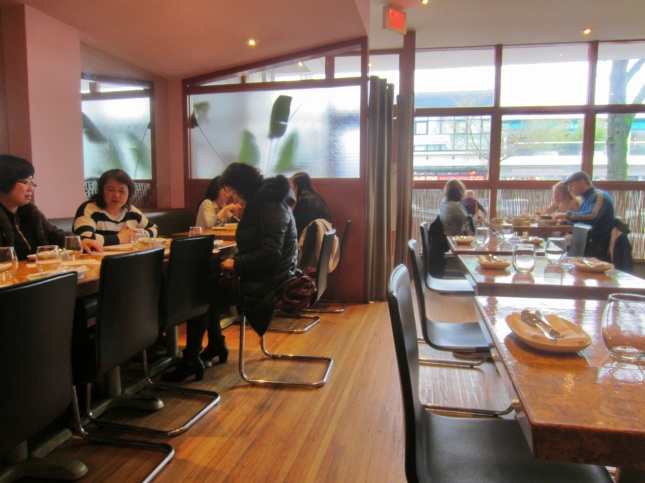 On the menu, what struck my curiosity right off the bat was a lamb dish, a braised shank in place of chicken that is normally used for this geng gari curry recipe. This typifies what Chef An is trying to do. Interesting too were a smoked salmon salad with pomelo sprinkled with fried salmon skin and toasted coconut and a banana blossom salad. For those who can’t get past pad thai at lunchtime, you can get it paired with Singha ($18) and be done with it.

Our two choices narrowed down to a stir-fry and soup.

I can just imagine the chef wielding dual cleavers to mince the beef, in this case a hanger steak, for the Stir-fried Beef with Holy Basil; ground meat would have produced rubbery results. Chinese long beans gave the dish a nice crunch. The savory meat was spooned on top of a bed of steamed jasmine rice. In keeping with how Thais enjoy this dish, a fried egg was served over the whole entrée. Holy basil was used both in the mince and as whole fried leaves as a garnish. The only reason the dish didn’t get my highest rating was an over-saltiness from the liberal use of oyster sauce, too much of a good thing. Otherwise, it was quite delicious (☆☆☆½). 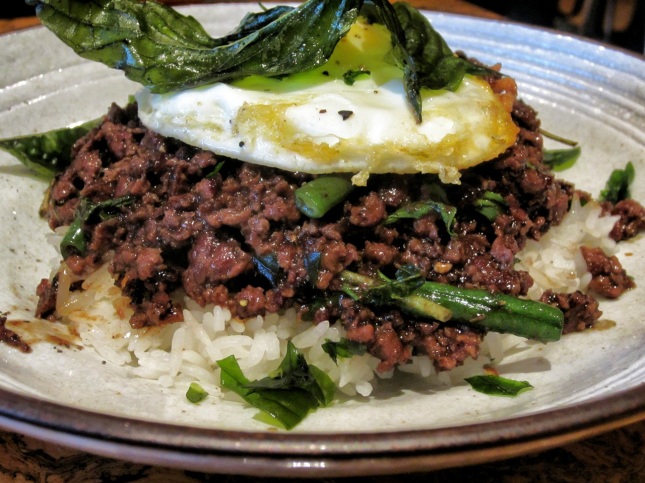 Faultless was Coconut Mushroom Soup (☆☆☆☆), Maenam’s interpretation of tom kha. Here was a satisfying soup, redolent of galangal and lemon grass, spicy from a couple of red Thai chiles, savory from fish sauce, bright from lime juice, rich from coconut milk, bitter and herbaceous from cilantro, all in perfect balance. Substance was provided by enoki mushrooms, meaty oyster mushrooms and pieces of chicken thigh. The last ingredient caused my wife and me some confusion because on the menu also was Coconut Mushroom Soup with Free Range Chicken (tom kha gai), which includes braised chicken thighs. Regardless, I would’ve licked the whole bowl clean if I had the cojones. 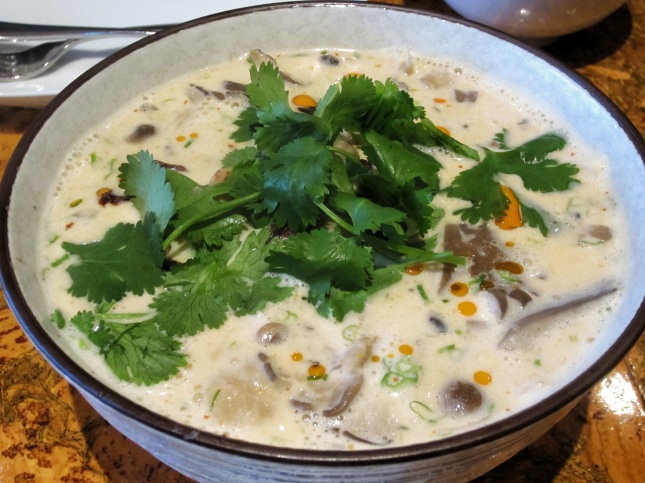 The other dining option for lunch would be a chef’s set menu ($27 per person) that included a starter, salad, curry and stir-fry. There is an equivalent set menu for dinner ($40, $35 for vegetarian). The menu changes seasonally.

We could easily make Maenam a regular stop whenever we’re in town.