It wasn’t until Anthony Bourdain in 2009 featured Side Street Inn on “No Reservations” that this local hangout became nationally famous. It’s the answer to the oft-asked question, Where do famous chefs go to eat after work? Some of Honolulu’s top chefs, including Roy Yamaguchi and Alan Wong, had been coming all along just to “hang out” and have good grub. The restaurant bar on Hopaka Street has also become a rock star among local and visiting foodies, appearing on many lists of ‘must eat’ places in Honolulu. The concept is simple: serve tasty comfort foods at reasonable prices and big portions. Woe be to the couple who wants to try more than a thing or two. It’s much better to be part of a larger party.

In July of 2010, a second location opened up along Kapahulu, a street at the eastern end of the Ala Wai Canal that is fast becoming a food mecca for locals and tourists alike, especially those who want to stay clear of Waikiki. Kapahulu also hosts Leonard’s, Rainbow Drive-In, Ono Hawaiian Foods, Ono Seafood, Irifune, Uncle Bo’s, and more. The new digs are classier (but not stuffy) than the Hopaka site that has a more down-to-earth ambience. What better place for my wife and me to have a final meal in Hawaii, and with my wife’s sister and her family to boot.

It would be an understatement to say the menu is astonishing. You could stare at the menu and have a frustrating time trying to decide what you want. The menu is that seductive—and mind-boggling. It’s said that the Kapahulu location has more on the menu than the original one. Let me see, shall I have smoked pork, musubi, garlic fries, rib-eye steak, kalbi, cheeseburger, steamed clams, furikake ahi, yakisoba, buffalo wings, chicken katsu, misoyaki chicken, yakisoba, oxtail soup, Hawaiian-style short ribs? The specials menu tempted us tonight with Korean chicken wings, Chinese ribs, blackened ahi, and more. See what I mean?

Even if a litany of delicious-sounding items made our eyes glaze over, in the end our first meal here had to include two of Side Street’s signature dishes: pork chops and fried rice. We could worry about da’ udda stuff some other time. We also augmented our meal with fresh poké and On Da’ Strip’s Chinese Chicken Salad.

The salad was beautiful to behold, a tower of nicely piled greens and shredded chicken, topped with fried wonton strips. But it was underdressed, like eating raw greens (☆☆½). Despite the whole foods appeal, substituting mixed greens for, say, simple shredded Romaine lettuce does not add anything. 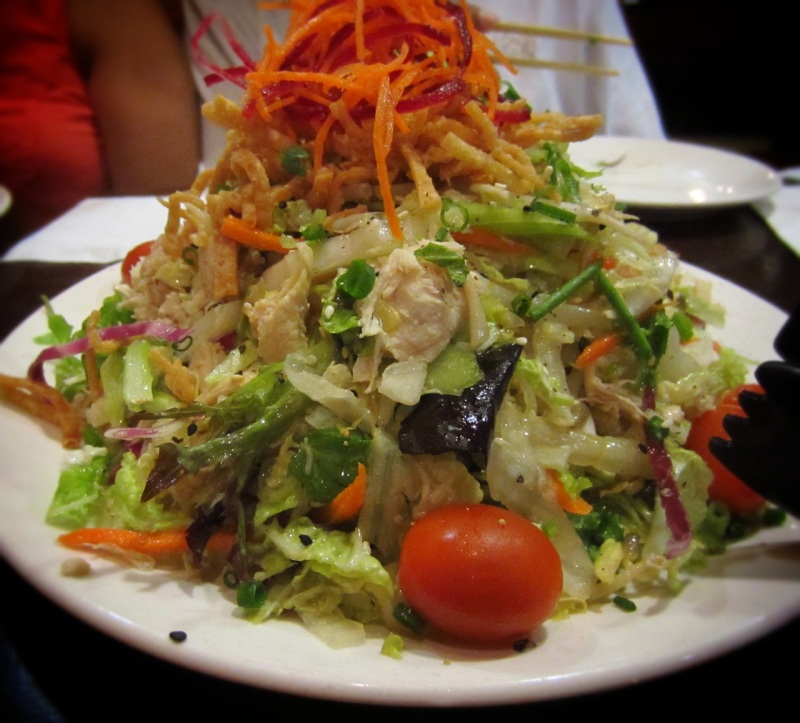 In Hawaii, it’s almost impossible to get bad poké. Ahi is always fresh off the hook. Not surprisingly, Side Street’s was very good (☆☆☆), although Ono Seafood’s (also on Kapahulu) is now my new standard. Market price likely is responsible for having kept the portion size reasonable, about a cup and a half’s worth.

Ample portion sizes are a different matter for the remaining two dishes. Three large chops constitute Da’ Famous Pan Fried Island Pork Chops. The crispy flour and cornstarch batter is thinly applied on succulent, thick and lightly seasoned chops, then pan-fried. Rather than serving them whole, the kitchen separates the bones from the meat, which it slices into half-inch pieces. The bones, which can only be sensibly eaten with your hands, are like ribs and terrific to gnaw and suck on. A plastic tub of ketchup is served on the side. Great chops (☆☆☆½).

Side Street’s standard fried rice is a combination of Portuguese sausage, bacon, char siu, peas, carrots and green onions, flavored with oyster sauce. That combination is enough for good Hawaiian flavors, but the addition of hon dashi is the ingredient that makes the rice an umami bomb. (Yeah, I know hon dashi contains MSG.) We got Da’ Works Fried Rice instead, which adds lop cheung and kim chi to the mix. All—and I mean all—kim chi fried rice I’ve had up to this point have been too soggy, likely from using too much kim chi or not wringing out enough liquid. Side Street managed to escape that shortcoming to provide a nice tangy accent to an exceptional symphony of ingredients (☆☆☆☆), the second great fried rice dish I’ve had on this trip. 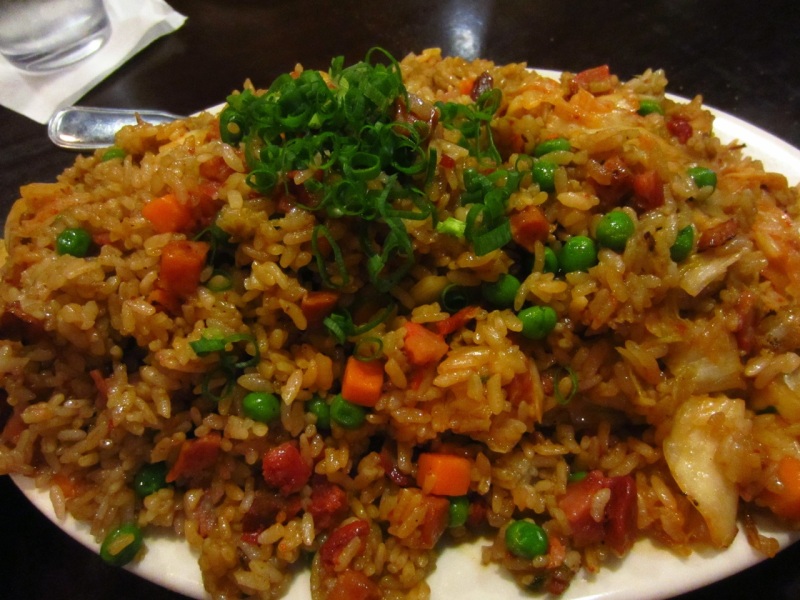 Side Street Inn deserves repeat visits. Mo’ bettah no can get.