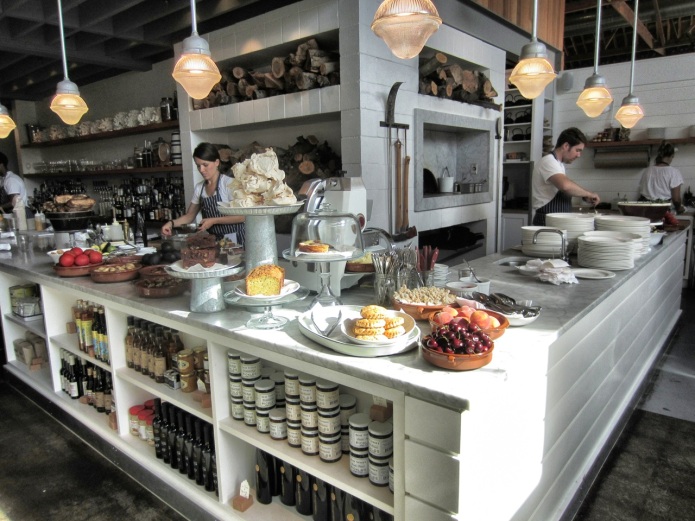 Not one, but two Seattle restaurants were honored by Bon Appetit magazine as being among the ten best new restaurants of 2013. To be more accurate, The Whale Wins and Joule shared the #9 spot. That’s not the only thing they share, because they are literally right next door to each other in the Fremont neighborhood of Seattle, just blocks from Lake Union.

The brief story of how this list was put together is here. Joule is a bit of a stretch on the list, not because of any judgment on my part of their food, but because it recently re-located to the current digs after spending some time nearby on NE 45th. New restaurant? Well, you get my point. Regardless, making this roster is a credit to both places. And, I have to say that I did enjoy dinner at Joule at their old spot.

Furthermore, Bon Appetit awarded the best dish (or more accurately, dishes) of the year to the tartares that Joule and Whale each make, the former using beef, the latter, lamb.

Renee Erickson is the executive chef at The Whale Wins. She helms another highly regarded restaurant in Ballard, The Walrus and the Carpenter, which nabbed the #3 spot on the 2011 best new restaurant list. I’ve never eaten there, though I’ve had a good view of it from Staple & Fancy Mercantile, the two dining rooms separated only by indoor windows that act as a common see-through wall.

My wife and I celebrated our anniversary at The Whale Wins. We started off with two cocktails. Cuddle Puddle (☆☆☆) combined vodka, grapefruit and sparkling water, subtly flavored with rose syrup. A grapefruit peel released its citrus aroma in the glass. Alpini Shrub (☆☆☆½) blended gin, strawberry shrub and an artemesia liqueur called Genepy des Alpes, the inspiration for the drink’s name. But the cocktail’s memorable virtue was the intriguing flavor of cardamom.

At home, I love roasting vegetables, which brings out their underlying sweetness and intensifies their flavors. That’s why we picked Roasted Cauliflower (☆☆☆). The kitchen contrasted the vegetable’s earthy taste with sweet cherries, chopped almonds and baby chickpeas, all roasted together, a cumin-infused yogurt tying everything together and conveying Mediterranean influences. 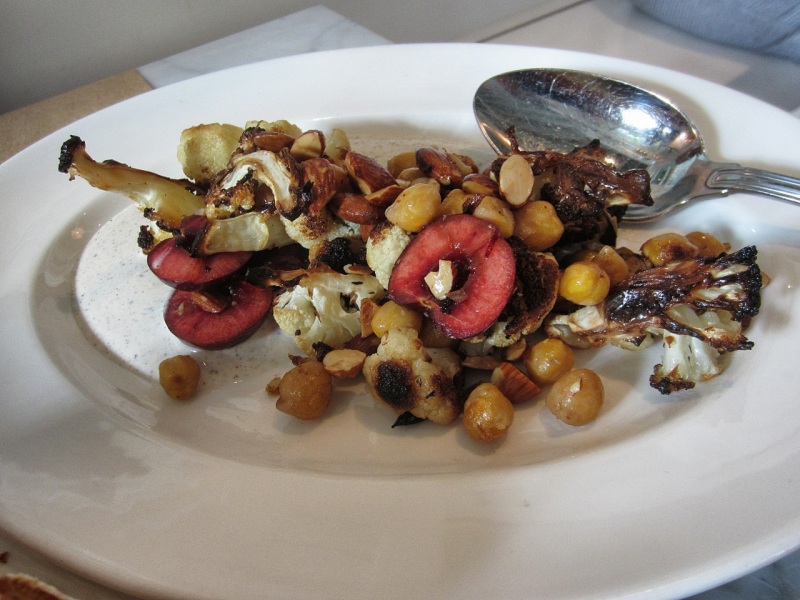 We weren’t prepared for the surprises of House Pickled Vegetables (☆☆☆½). There was a cornucopia of vegetables, all nicely pickled: roasted cherry tomatoes, fennel, garlic ramps, portobello and white mushrooms, baby carrot, onions, roasted mild chile peppers, cauliflower, summer squash, radishes, raisins and figs. We were amazed as we did an inventory. Even more amazing was that each vegetable was pickled differently.

We don’t usually order roast chicken off any menu, probably because other entrées seem more interesting. Based on ecstatic reviews though, we made an exception tonight for Mad Hatcher Roasted Half Chicken (☆☆☆☆). Visions of facing down half a 4-lb megabird so common at grocery stores nowadays prepared our minds for a take-home box, but not to worry. The chicken was on the smaller side, almost like a large game hen. A little research revealed that a farm in Ephrata provides the restaurant free-roaming French chickens. Each quarter was nicely trimmed and roasted to crispy perfection, skin crackling to the bite and properly seasoned (meaning generously salted). What’s more, the meat was succulent, perfectly cooked. By itself, the chicken was outstanding, but it was pumped up by an inventive combination of lemony aioli, fresh sliced tomatoes and housemade bread & butter, cucumber and onion pickles.

The recognition that Lamb Tartare received from Bon Appetit got my interest. It was the final entrée we ordered. We’ve had raw beef before, certainly fish, but lamb?  Coming to your table with a raw egg yolk on top, the dish might seem to scream HEALTH ALERT!!! But, it’s not like eating uncooked chicken or pork, I figured. After all, the meat is usually cooked rare. On top of that, I use a raw (organic) egg in my breakfast smoothies. So, in a way, it was a no-brainer. The lamb was minced with shallots, preserved lemon peel and mint, and came with three slices of well-toasted baguette (too well for my taste), which provided crunch to the tartare’s coarse pastiness. We judged it a stellar dish (☆☆☆½), even my wife who is not particularly enthusiastic about lamb. The tartare had no trace of ovine flavor.

The restaurant has a casual, rustic and inviting atmosphere, heightened by the soaring west-facing, floor-to-ceiling windows that admit a great deal of light and by the open kitchen sandwiched between half back walls of neatly stacked wood for the stove and expansive counters where the mise en place arrangement lets you see many of the ingredients that might appear in your dishes. This is a very popular restaurant. You can’t make a reservation unless there are at least six of you. The wait can be long if you arrive when the restaurant is full.

Updated 10-21-13: We returned to The Whale Wins to join a couple of friends for lunch. The menu is a shorter version of the one for dinner though not more economically priced. We sat at a communal table at the front of the restaurant, though there was some distance between us and another party.

My wife and I ordered roasted raab and roasted clams.

Broccoli raab, a favorite vegetable among Italians, is a bit problematic since its inherent bitterness can be off-putting to some diners. The usual remedy is to parboil it briefly to temper the harshness. Appearing like broccolini stalks, the kitchen roasted them with peanuts and pine nuts and sweet white and yellow corn kernels in the open oven stoked by firewood. Not very bitter at all, the vegetables (☆☆☆) came out nicely browned, served on top of a harissa sauce. They are another in a good selection of well-prepared seasonal roasted vegetables available daily.

A generous amount of Hama Hama clams were also roasted in the oven (☆☆☆), accompanied by slices of what were described on the menu as fingerlings but looking more like Yukon Golds. We put every slice of rustic bread that we also ordered to good use by sponging up the broth prepared with Romesco, white wine, butter, celery and marjoram—a good and satisfying entrée.

Dessert also called. Mine was a brownie (☆☆☆), richly chocolatey and studded with walnuts, served on creme anglaise. The top of the brownie was crispy and dusted with powdered sugar. Something this dense was far too much to polish off at one sitting, so I brought part of it home. 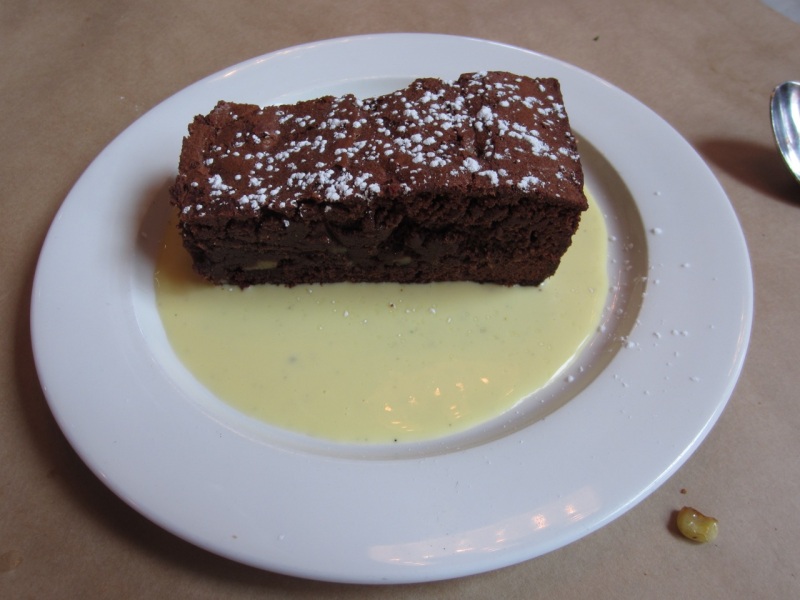 My wife chose a poached pear (☆☆☆) and honey ice cream combination. The pear still retained some of its firmness and was poached in a saffron and citrus (likely orange) syrup. The sesame seed crackers were delicious.

Our friends ordered different things from the menu. 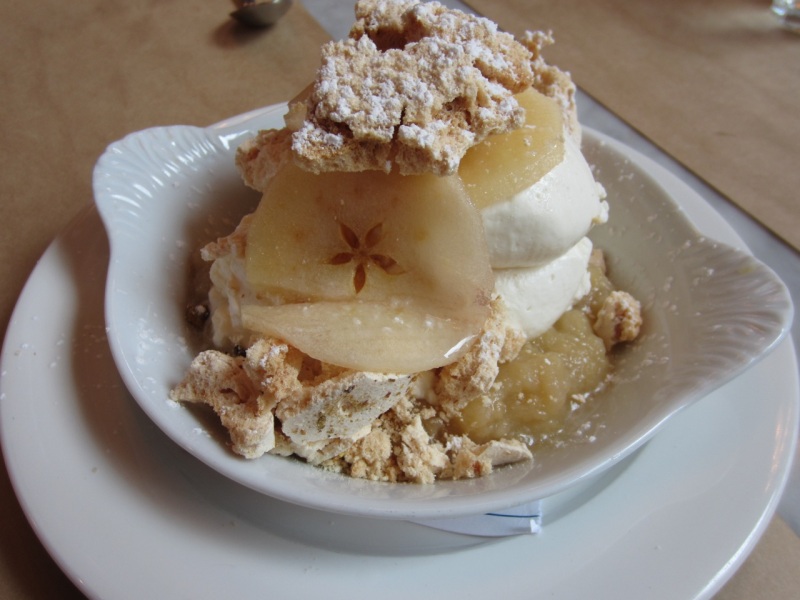