It’s always nice to pull into a larger city on the road just to expand your food and entertainment options. Eugene is the largest city in Oregon after Portland, just barely edging out Salem for that distinction. Downtown Eugene has nice shops, restaurants and cultural amenities without the big city traffic and noise, likely reasons that it has been on several lists as one of the best places to live in the U.S. Tonight, we were looking forward to a Vietnamese dinner and movie. Within blocks of each other were what we were looking for: a Vietnamese-French restaurant (Bon Mi) and an art house cinema (Bijou Metro, where we saw “Frances Ha”).

The French menu consists of French-inspired sandwiches, though they appear on the surface to be kinds that you might get at any good sandwich restaurant. The Vietnamese menu is a bit more extensive with pho, bun and, as the restaurant’s name would suggest, banh mi. My wife and I had the same entrée in mind, bun thit nuong (☆☆☆) as an antidote to the long day of driving in warm weather.

It came in a large bowl with a generous amount of grilled pork, a nod perhaps to American appetites. The rice vermicelli, rather than the usual thin bun noodles, were thicker (banh canh) like Japanese udon, making it a more substantial noodle salad. Nuoc cham was served in a very small dish, making me wonder if it would be enough to dress the large salad. Rather than dipping, I prefer to toss the sauce into the bowl and mix everything up. Everything in this case was the noodles, pork, plenty of cilantro, green onions and do chua (shredded pickled carrots and radish). A fair amount of the last item compensated for the skimpy nuoc cham, imparting a sweeter, vinegary element. We had no complaints because the dish was very tasty, an intriguing variation with the savor of delicious pork and chew of thick noodles.

If we come back here again, we’ll have to give the pho and banh mi a shot.

Whenever I drive between Weed and Mt Shasta (the town) along I-5 in northern California, my breath is taken away by the spectacular beauty of Mt Shasta (the mountain) looming to the east. For some odd reason, I had always assumed that Mount Shasta was a national park. Conversely, I never before thought that Mount Lassen was, which we had just visited. Maybe the majesty of Shasta gave me the impression that it should be an important charge of the National Park Service. Some research revealed that there had been several attempts to get Congress to confer park status as far back as 1912, but all have so far failed. Ironically, though there were resolutions in the House for both in 1914, Mount Lassen drew attention away from Shasta when it erupted that very year and all effort was expended by Congress to make Lassen a national park. It seems that there is nothing unique about Shasta and its surrounding area that other established parks already showcase, so the argument goes. So for now, Shasta has to content itself with being a National Natural Landmark, which is equivalent in a beauty contest to getting the “most inspirational” award.

There are many a Black Bear Diner on the West Coast, 59 and counting. Truthfully, we had never heard of the chain before until we were here in Mt Shasta. And, as it turned out, this is where it all started. There is nothing to suggest a franchise except for the sign outside (above) and the menu printed on the inside pages of what looked like an informational newspaper (for mass distribution?). There are also more than the usual number of diner-labeled gift items in a small alcove which implies there might be other outlets. Otherwise, the interior has the look of a local diner or coffee shop.

The waitress told us that their chicken fried steak (☆☆☆) is a customer favorite, so that settled it for us. It was quite possibly the best I’ve had though it must be said the dish is not a usual breakfast choice for me. The steak was wonderfully tenderized and the breading nicely seasoned, crunchy and not in the least greasy. The gravy, which has never impressed me wherever I’ve had it, was adequate enough. Black Bear Diner encourages customer choice, so we opted for country red potatoes and poached eggs, both good. 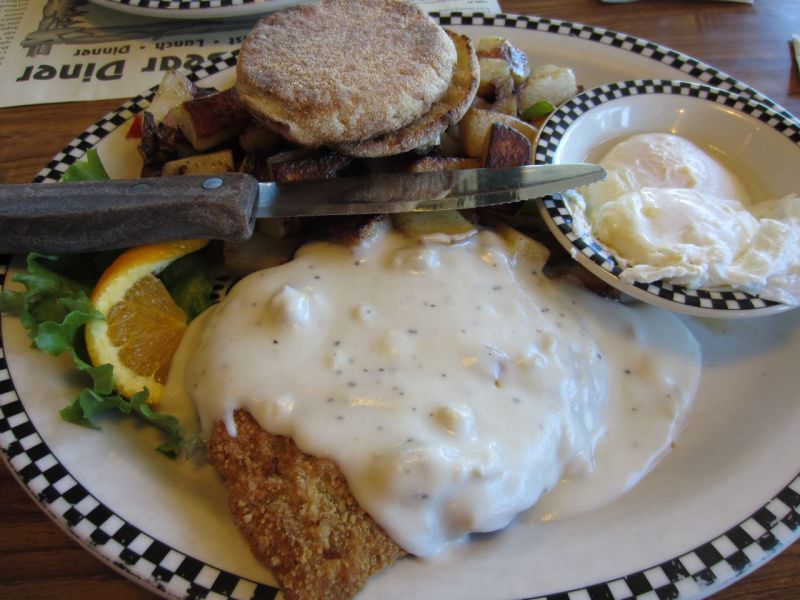 The breakfast menu invites return visits. We won’t have to travel to Mt. Shasta for that, because there is one in Federal Way.

A whimsical touch to the diner’s ambience are the wood bears carved out of Washington red cedar.