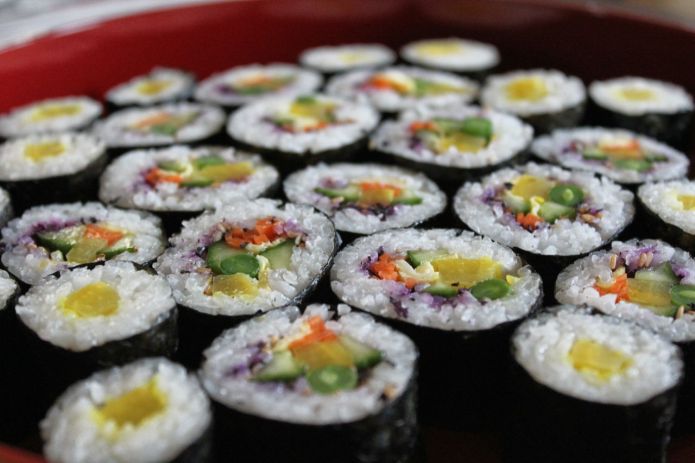 Today is New Year’s Day. Like every year, the family can relax and enjoy each other’s company, watch some BCS bowl games and—let’s get down to it—eat the food that we’ve labored all day yesterday to prepare. Somehow, in a small kitchen, everything gets made, the only things done elsewhere being teriyaki chicken wings and chashu (char siu) that are barbecued in the backyard.

The cooks included my father-in-law, three sisters-in-law, two brothers-in-law, a nephew, my wife, my daughter, a longtime family friend and myself. In other years, my other daughter and her husband have also helped. Because they now live far away, they can’t always join us. Friends of the family also drop by occasionally, sharing in the repast.

The food will be our primary source of sustenance for the next few days. In the past, we’ve made way too much food, more than we could reasonably finish. As a practical matter, this year we’ve made a concerted effort to ‘downsize.’

Toasted mochi is a treat. The hot broth of ozoni softens mochi, becoming limp and stretchy as it is lifted from the soup. The mochi can be eaten directly from the soup bowl or dipped first in kinako (roasted soybean flour), which has a peanut butter-y and roasted flavor. There’s another way. Once the mochi has been browned in a foil-lined pan, accentuating a toasty flavor, our family likes to steep it in hot water to soften, then remove it to a plate, sprinkled with sweetened kinako. 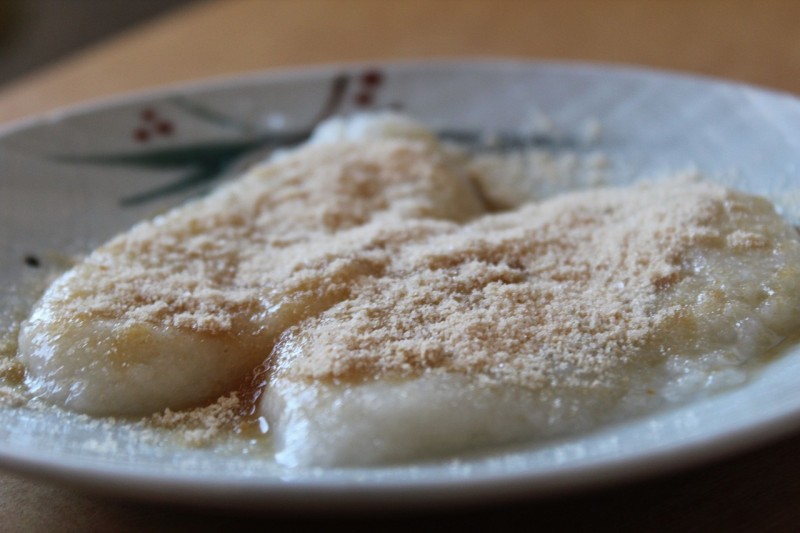 Kuromame (simmered black beans) takes a long time to make. These beans can’t be rushed. They are sweet and salty from sugar and soy sauce. Some recipes handed down through the generations call for the addition of iron nails while the beans simmer, supposedly to keep a deep black color and impart a glossy sheen, having to do with a chemical reaction between iron and tannin. Modern sensibilities no longer call for rusty nails anymore, though my father-in-law has done it in the past. Some recipes add a piece of kombu for some savoriness.

A good harvest is identified with gobo (burdock root), used in several osechi recipes. The most popular is kinpira gobo, juliénned burdock and carrot sautéed with soy sauce, sugar and mirin. Burdock, a root vegetable, is sold as a whip, which can reach lengths of several feet. They are painstaking to shred and tend to darken fast after cutting unless plunged immediately into acidulated water. That’s the reason most people buy convenient frozen packages of pre-slivered gobo and carrots these days, the tradeoff being soggier sautéed vegetables.

Another common burdock recipe is tataki gobo in which burdock is pounded to split the roots, letting an acidic sauce penetrate the fibers better. The gobo is combined with a generous amount of sesame seeds that are toasted, then ground in a ribbed mortar (suribachi) with a wooden pestle to make a very flavorful paste. Here, you have to start with fresh burdock. 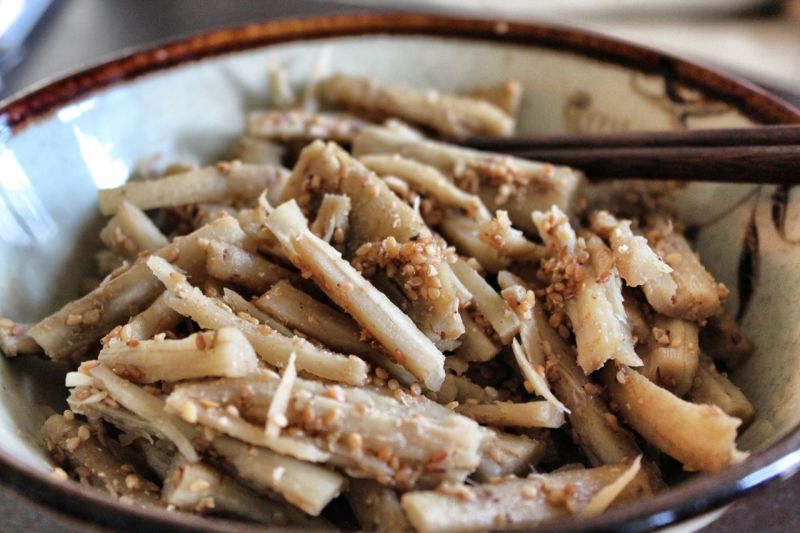 Products from the sea are important in osechi, the most prominent being kombu, a kelp that imparts umami to Japanese dishes, primarily in the widely used stock called dashi. A fish that is traditionally grilled is tai (sea bream), which is not common available in the U.S. More likely to appear on the table is steamed lobster or even boiled shrimp. In Seattle area Japanese markets, the very sweet Hood Canal spot shrimp are sold at this time of year. Another very common seafood preparation is tazukuri, sardines glazed in soy sauce and sugar. Sardines are sold dried. The recipe’s generous amount of sugar melts into a very sticky glaze. My first-time experiment with this recipe this year went too far; it spent so much time over the flame that the sugar reached the candy stage, pretty much needing a hammer and chisel to pry the fish apart. We had to toss it out in the end.

Sushi is a very important part of modern-day osechi, although not historically authentic. While some families may go through pains to make elaborate kinds, our’s sticks to the most common forms: inarizushi and makizushi. Over the past few years, my daughter has become the family expert. While she makes makizushi with unagi (broiled eel) and shiitake, neither of which she cares for, she also experiments with new ingredients, including shiso (perilla) furikake, which she does like. My sister-in-law made the inarizushi. Because we had a flawless piece of ahi tuna, my daughter made maguro sushi for the first time. The painstaking preparation of sushi ingredients, including seasoned rice, kampyo (dried gourd strips), egg, vegetables, shiitake, unagi and takuan, is done by several family members.

A dish I’ve made the last two years, konnyaku and atsuage kinpira, uses konjac gel, the texture of which is firm, somewhat crunchy, that I liken to soft cartilage. The dark form is flavored with hijiki, a sea vegetable. Atsuage is a type of fried tofu. The kind that I bought at Mitsuwa market in San Gabriel is triangular in shape, which is not conducive to cutting into uniform pieces. The more common form is rectangular. Like kinpira gobo, this is a simmered dish using soy sauce, sugar, mirin and shichimi (a Japanese pepper blend). This year’s result turned out much better than last.

A vegetable dish that is traditional is sandomame goma-miso ae, green beans with a sesame-miso dressing. You’ve probably noticed that sesame seeds appear in almost all the recipes we’ve made this year. This one is no exception. The dressing is simply red miso paste, toasted and ground sesame seeds, mirin (sweet sake) and sugar.

Shiitake mushrooms simmered in soy sauce benefits from an overnight steep of dried shiitake in water to yield a concentrated soaking liquid that is used to bolster the simmer sauce that also includes soy sauce, sugar and sesame oil.

Kagami mochi looks like a snowman, the “body” made up of two different sizes of mochi and the “head” traditionally a daidai orange, a bitter orange, a variant of which is the Seville. Here in the States, it has been supplanted by mikan (satsuma orange or satsuma tangerine), mainly because daidai is not commercially grown. Mikan with the stem and a single leaf still attached are highly prized. My father-in-law has a prolific mikan tree in the backyard, so we are never wanting of this fruit. The peel is generally very easy to remove, sometimes slipping off as a single piece. But, we discovered this year that this might be a sign that the orange is drying out. The tree was pruned earlier in the year, with the result that the fruit is much sweeter and juicier than in the past and the skin, while not difficult to peel, comes off in small pieces. The family has now been exposed to a “gold” standard.

Mikan from my father-in-law’s tree

Okay, now for the non-traditional stuff.

We enjoy teriyaki chicken wings and chashu for osechi. These are not customary foods, but reflect the influence of America’s melting pot. My father-in-law has been making these for years. They are as much a part of the New Year spread as anything else.

For years, we also have been making wonton, Chinese in origin, filled with a mix of ground pork and beef, water chestnuts, green onions, sesame oil, garlic and soy sauce. Tempura shrimp also makes an appearance at the table. Because shelling, deveining and butterflying the prawns take time, several family members get involved in the preparation, battering and frying. These turn out to be the last things that are completed on New Year’s eve. The frying of 5 pounds of shrimp and 3 pounds of ground meat, assumed by both brothers-in-law, consumes an enormous amount of time.

My father-in-law, ever the experimenter, invented an unlikely mochi concoction that is now a family favorite—sort of a mochi slider, filled with American cheese and wrapped in nori, savory and sweet, now familiarly called jichan’s surprise mochi.

We also frequently, but not always, make tamales, obviously not Japanese in origin, but again a tasty part of the New Year repast and an East LA influence. My sister-in-law makes a mean version, originally starting out many years ago with shredded beef but more recently adding non-meat versions for the vegetarian family members. This year, we forewent tamales.

Yet another Chinese-influenced dish is a variation of a Chinese salad. My sister-in-law uses shredded cabbage, julienned carrots, green onions and sliced almonds, dressed with a sesame oil vinaigrette. Instead of fried saifun (mung bean noodles), she uses crumbled dried ramen noodles. The moisture of the dressing is enough to soften them.

At Marukai, I saw shishito peppers for sale. This past summer, we bought some from a local farmer from eastern Washington. These peppers are wrinkly in appearance, seedy and very mild as peppers go. So, I roasted these in the oven and sprinkled them with kosher salt. While this is not a traditional osechi dish, they were nice to have as additional green vegetables.

Osechi is an important part of the holiday season for many Japanese American families, including ours. The effort involved in preparing the feast is formidable if a great variety is desired. For that reason, many families don’t bother with it anymore, its cultural and symbolic significance having been lost, poorly understood or unappreciated. And frankly, many of the dishes no longer appeal to modern palates, many traditional foods being supplanted by foods borrowed from other cultures. Our family will try to keep up the tradition for as long as there are members willing to do it.