I was under the mistaken, naive impression that the only geyser attraction in the world was confined to Yellowstone. It turns out that there are many throughout the world. New Zealand has its own, of course, in the so-called Taupo Volcanic Zone, a vast volcanically active area stretching between Mt Ruapehu to the southwest and White Island to the northeast. Last week’s eruption of Mt Tongariro is proof of ongoing restlessness. Like Yellowstone, there is a super-volcano lurking underneath that can erupt at any time with the potential to cause a global nightmare.

Though smaller in scale, the park that rivals Yellowstone in variety and beauty is Wai-O-Tapu Thermal Reserve Wonderland, managed by the Department of Conservation, with its mud pools, geysers, hot springs, vents, fumaroles, craters, sinter formations and more. The geologic features here are very young, having been created by recent volcanic activity within the last 1,000 years. It is also very unstable.

The reserve is about a half hour drive southeast of central Rotorua. We ventured out there today on a cloudy day, but thankfully it wasn’t raining.

Wai-O-Tapu’s big attraction is the Lady Knox Geyser. The promotional material promised that it would erupt at 10:15am every morning. Wow, I thought, a geyser that can keep time, even on daylight savings time! The secret, it turns out, is human intervention. The host pours a surfactant down the geyser’s throat to set it off. What happens is that the soap breaks the surface tension of the colder water in the upper layer to allow the hotter water underneath to break through and force itself through the vent, causing the eruption. This explains the geyser’s uncanny time-keeping ability. Depending on the weather, Lady Knox can erupt for a full hour and over 60 feet in height. 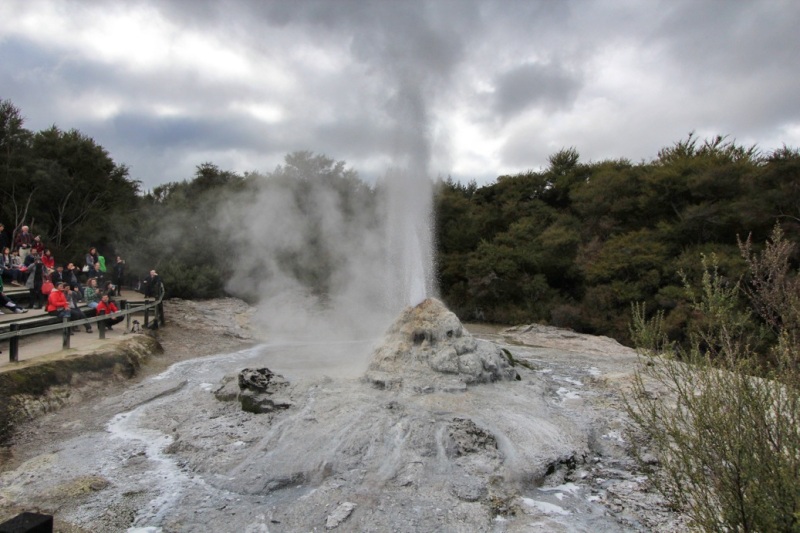 While Lady Knox is in a separate location within the reserve, Wai-O-Tapu’s other attractions are along loop trails that can be explored at your leisure. Many of the loops join and crisscross others, so we wound up going over some of the same ground.

The largest hot spring is also its most dramatic. It was startling to see Champagne Pool fringed at one edge of its embankment with a bright orange pigment, a result of high arsenic and antimony compounds in the geothermal liquid. Formed only 900 years ago when hydrothermal water filled an explosion crater, it also bubbles with dissolved carbon dioxide which gives the pool its name. Not noticing the effervescence, I suspect it’s more visible on clear days or when steam is not obscuring it.

A most unusual attraction is Devil’s Bath (top image), a pond that looks as if someone dumped thousands of gallons of lime green paint into the water. The actual color varies slightly depending on time of day, but the initial reaction upon seeing it is disbelief. Sulfur and ferrous salts give the pond its color.

Wai-O-Tapu has the largest sinter terrace in the Southern Hemisphere, having overtaken the Pink and White Terraces at Lake Rotomahana that were destroyed by the Mount Tarawera eruption of 1886. Tarawera is also in the Taupo Volcanic Zone (see above). Primrose Sinter Terrace was formed from water overflowing from the Champagne Pool, creating a very large expanse of siliceous deposits.

Sintering along the edge of Primrose Terrace

At the end of one loop trail, we admired Lake Ngakoro, a jade-colored crater lake filled with water fed by Champagne Pool. The lake was formed after an eruption over 700 years ago.

Going back toward the park’s entrance, we passed by craters that were devoid of water. The walls of Birds Nest Crater harbor nests of mynahs and starlings, whose eggs are incubated by the crater’s heat.

Sulphur Cave Crater, best seen from an overlook at the end of a spur off the main trail, showed sulphur deposits near the vents. 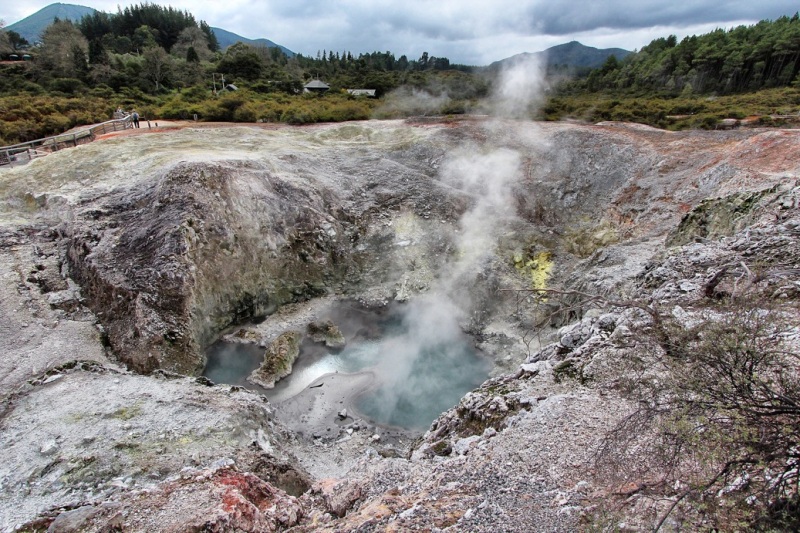 A curious sight throughout the reserve was a bright orange-yellowish coating on the branches of shrubs. Apparently, it is a kind of algae (Trentepohlia) that has an orange pigment. 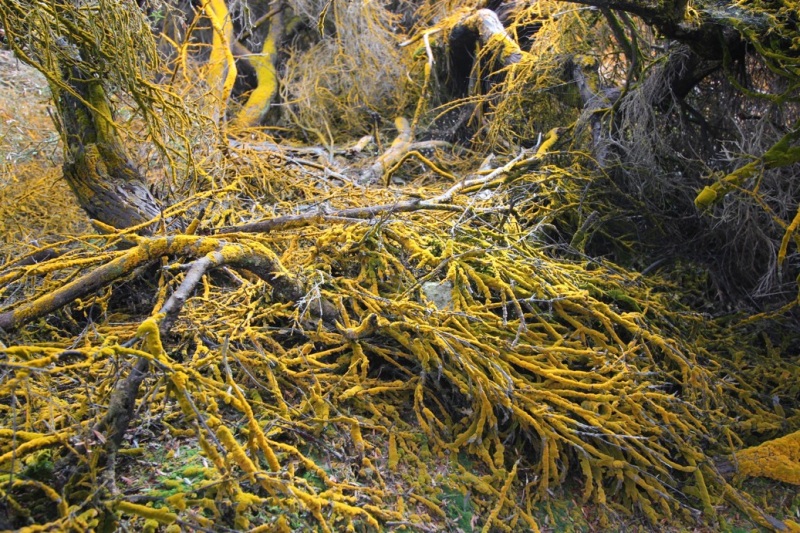 What would a thermal reserve be without mud pools? The best place to see them is in another area of the park.

Mud pools are found in a different section of the park