It is claimed that the best food in Thailand is served by street vendors, especially in Bangkok. A melting pot of cuisines from many Asian nations, including Cambodia, Burma, Laos, India and the Malaysian archipelago, but primarily Thai-Chinese in influence, Thai street food is a cultural phenomenon and an adventure. One restaurant in nearby Redmond describes its offerings as Thai street food. The menu is very small, so it would be easy to go through its entire repertoire in just a few visits.

Heavenly Beef came on a sizzling platter; the meat is marinated and is flavored with ground coriander, sauteed in a sweet dark soy-sugar sauce and served on a bed of sliced onions. Though the beef was somewhat chewy, this was a very tasty dish. Some greens, like cilantro, would have improved the presentation.

Burmese-inspired Khao Soi Kai, which is also popular in northern Thailand, here is a coconut broth-curry soup dish with rice noodles (egg noodles are more traditional), fall-off-the-bone dark chicken meat, and topped with a tower of fried crispy egg noodles. This, too, lacked greenery to make it more eye-appealing, but was a fantastic preparation, to me the best coconut broth dish I’ve had in a long time. I’m hoping that the lack of green garnish (or visible garnish of any kind) is not indicative of the restaurant’s cooking. Khao soi is generally served with limes (which would have added a nice tartness to the dish), but none came. 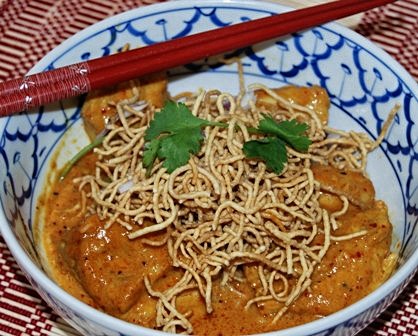 Overall, while it doesn’t replicate the excitement and chaos of real Thai street food-eating (it is a sit-down restaurant after all), Iyara Thai is a good place to get an introduction. 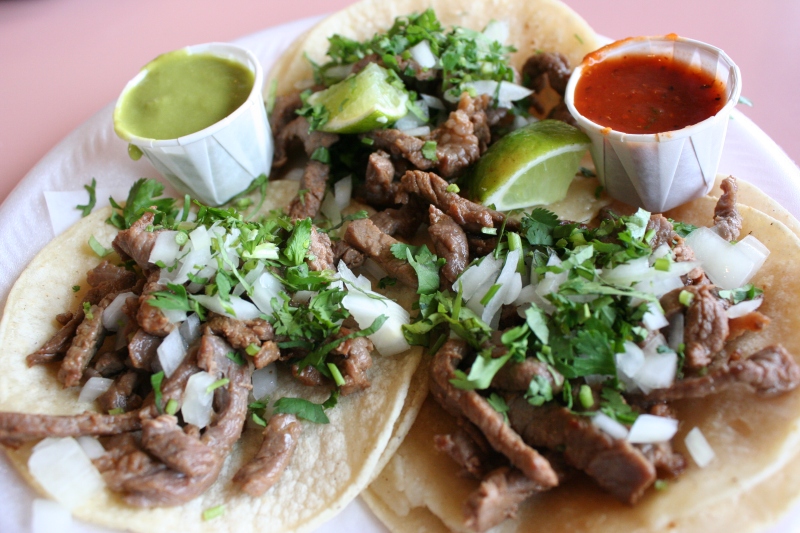 It’s usually fruitful to ask the locals where to go for the best place to eat. A few years ago, a Hispanic clerk at the state liquor store pointed us to Taqueria Yungapeti up the street for a great place to find soft tacos. From outward appearances, the restaurant must have been a fast-food joint before, but a family purchased the property and converted it to a Mexican restaurant specializing in street foods: tacos, huaraches, etc.

You often wonder if the passage of time will improve your memory of foods you swore were a divine gift to the culinary world. On our return visit for lunch today, just one bite of the carne asada tacos (☆☆☆☆) proved once again to us that this place has the best soft tacos we’ve had anywhere. The corn tortillas are made on the premises and the fillings are nicely seasoned, adorned with fresh chopped cilantro and onions. The salsa bar ensures that you have a nice selection, from the mild tomatillo to a fiery roasted chile sauce. Usually at a taco bar, I’m pretty satisfied with a single serving of three tacos, but it’s hard not to order tacos with other fillings afterward. Hands down though, the carne asada are our favorite. 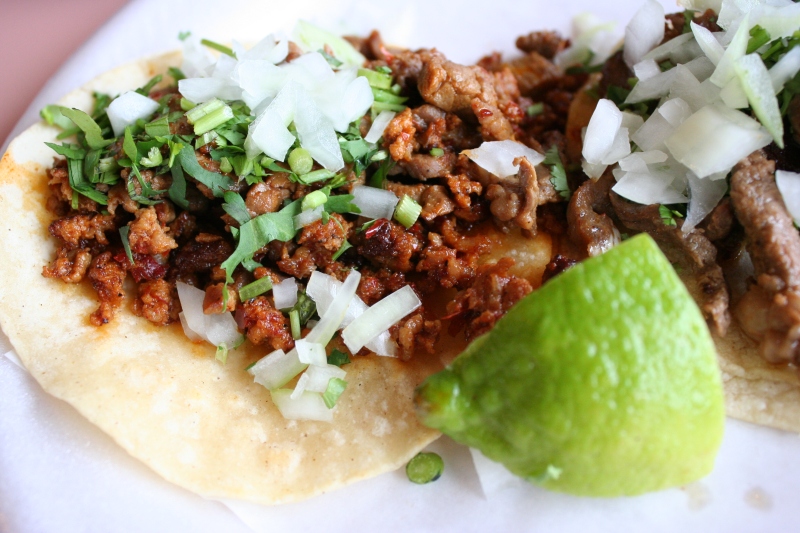 With the demise of 26 Brix, Walla Walla was left with one fewer great kitchen. The economics of running a fine dining restaurant in a town of Walla Walla’s size must be daunting, though the prospect of drawing in the university crowd and the growing number of winemakers in the valley is surely what drives an entrepreneur to even try. Saffron Mediterranean Kitchen is now regarded by locals as the best such restaurant in town. The name bespeaks Mediterranean food, though it’s apparent that Northwest ingredients make frequent appearances. What better way to try different things than to order from the small plate menu.

We dined here two nights in a row.

The steamed clams were really good with the (salty) broth also harboring shredded and diced smoked ham hocks, lobster mushrooms, green onions and saffron, a kind of broth that cries out to be mopped up with bread. 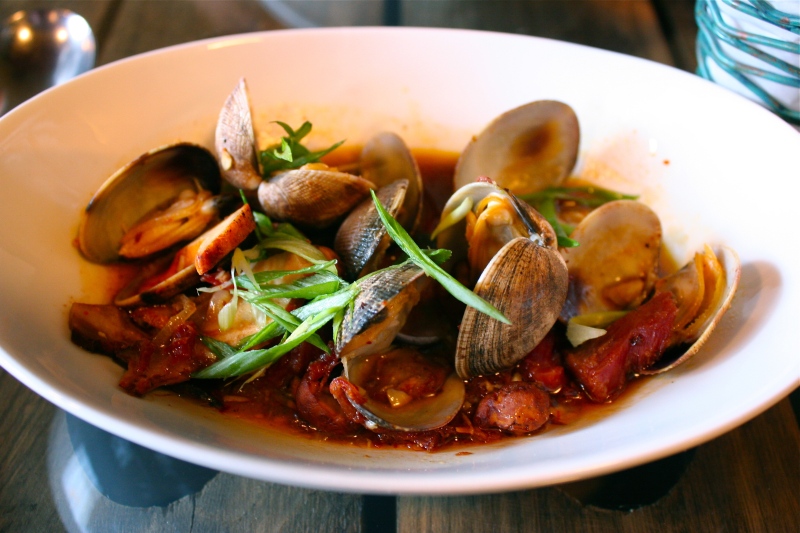 The special of the night was a Merguez sausage (lamb) appetizer with roasted cherry tomatoes and corn, grilled zucchini and cilantro. The sauce here was also very good, but no spoons or additional bread were provided to eat it all up. 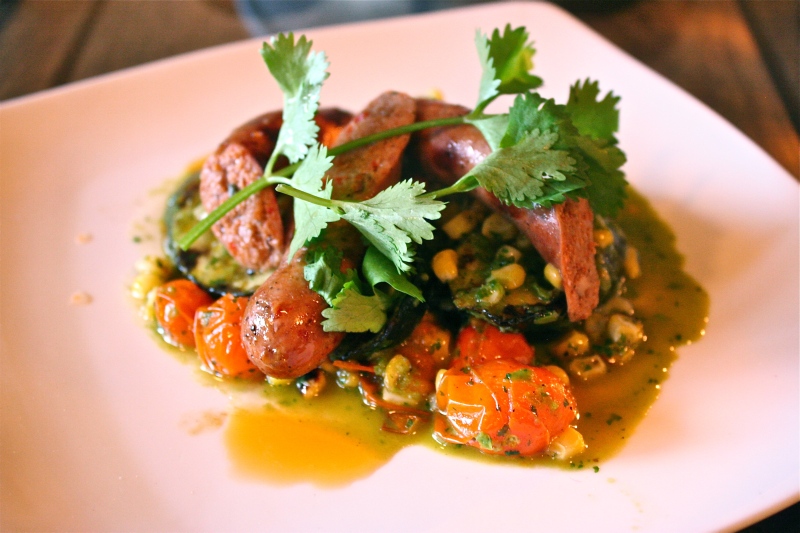 The flatbread (called lahmacun, Turkish in origin) tonight was spread with a concentrated tomato and piquillo pepper sauce and topped with ground lamb and lemon oil, then sprinkled with parsley and green onion slivers. 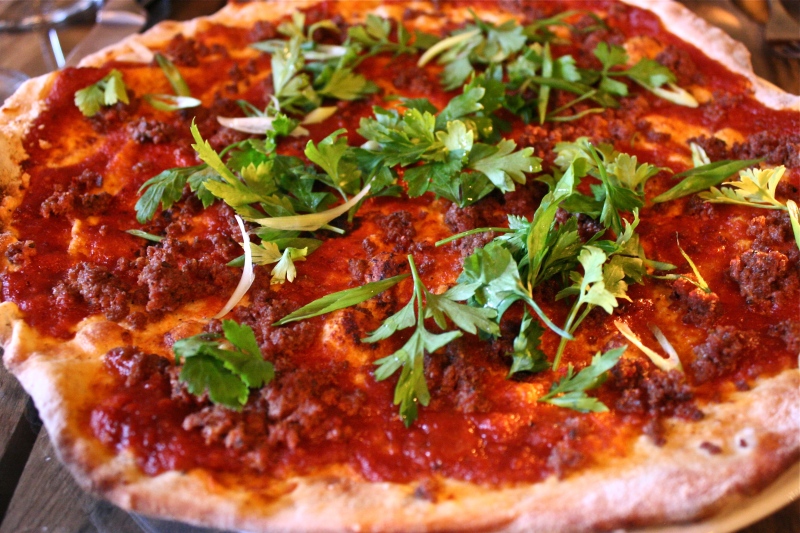 This was an intensely flavored flatbread whose flavor grew on me as I ate more. For dessert, we really enjoyed a chocolate semi-freddo served with a “savory” spread of ground hazelnuts and carrot puree. The carrot curls were baked to give it an interesting crispiness. 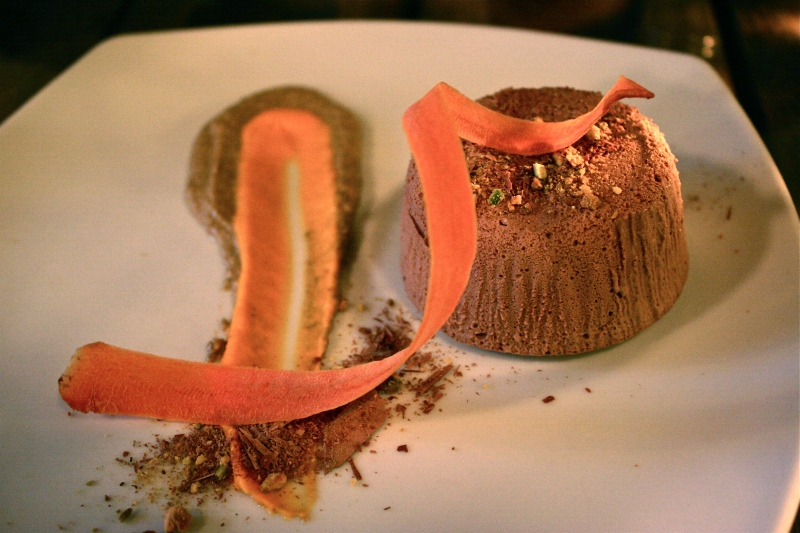 I forgot my camera, so unfortunately there are no pictures of our meal.

We shared a grilled baby octopus, tomato salad and a Spanish-style flatbread. The octopus came with garbanzo beans, parsley and a delicious vinaigrette made with tahini. The salad was a tasty combination of cubed heirloom tomatoes, lemon cucumbers, chopped olives, mint and cilantro. The flatbread was topped with minced Spanish chorizo and shrimp and a savory cheese (probably Spanish).

Saffron will be a destination restaurant every time we visit Walla Walla.