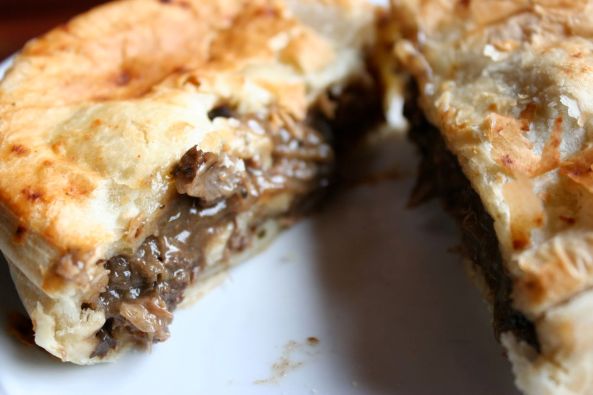 At first, I thought it was my imagination. I first noticed it in the local Christchurch supermarkets. Then, I noticed it even in small restaurants and bakeries … and then on our vacation in the Southern Alps. Gluten-free. Everywhere you go, menus offer gluten-free alternatives. Public awareness is obviously much higher here than in the States. Mind you, gluten-free baked goods are still not nearly as palatable as their gluten-y counterparts, but at least celiac customers have a choice.

We noticed this time and again: food portion sizes are very reasonable here. Never were we given enormous servings that are all too common in the U.S. Nothing was super-sized. Is gluttony passé? Although we rarely saw an obese Kiwi, statistics indicate that in the English-speaking world, only the United States has a higher obesity rate. So, something doesn’t jibe here.

I also had my first taste of venison in the form of a pie. It was actually quite good, a recommendation by a server at a Makarora cafe (“Are you game?”). The meat wasn’t gamey like I thought it was going to be; I later discovered that most elk in NZ is farmed. We saw large herds of them in pastures on our road trip.

Marmite is a product that I believe you can pick up in the States, if you look hard enough, though it doesn’t taste quite the same. This concentrated yeast spread is very common here. The most popular way of consumption appears to be as a spread on morning toast. To me, they look like thick fish fertilizer, very dark brown in color. They yield a very salty and yeasty taste that should be applied sparingly. Umami on steroids. Not too bad if you want a savory toast.

Do you like Ovaltine? Then perhaps you might savor Milo, a beverage made from chocolate and malt powder. It has health benefits since it contains calcium, iron and B vitamins. Though it was created by an Australian, it’s very popular here (owned by Nestlé), as well as in many parts of Asia and Africa. Milo breakfast cereals are also marketed in NZ. Visitors who first taste Milo are usually not impressed, in some cases appalled. In trying to be good Kiwis, Kathy and Chris bought a container, but no matter how much they tried, it was unpalatable. Ovaltine drinkers will find it much weaker and less sweet.

New Zealanders are very fond of savory breakfast options. Their breakfast baked items include muffins and scones that are just as likely to be savory as sweet. There is one breakfast here that was everywhere on our week-long vacation. I gather it’s called The Big Breakfast. It consists of scrambled eggs, lamb sausages, bacon or ham, grilled tomatoes, toast and fried potato patties. On our tour, we couldn’t order from a breakfast menu, likely because a buffet was easier for a trimmed-down wait staff to accommodate diners during the off-season. If we opted for the hot breakfast, The Big Breakfast items were what were served in the warming trays.

Finally, no discussion of NZ (and Australian) cuisine would be complete without talking about meat pies. Filled primarily with meat and gravy, they can also contain mushrooms, onions and/or cheese. These were in every bakery, bus stop café and cafeteria. Closely related to the meat pie is the sausage roll where ground beef or pork or both are encased in puff pastry. I’m guessing it’s the overconsumption of the pies and rolls that contribute to NZ obesity, similar to our insatiable appetites for burgers and fries and pizzas, which by the way are plentiful here, too.