Port Townsend is a nice place to spend a few days to relax, go shopping and eat. We should come here more often, but making time seems to slip by without notice. The Palace Hotel was running a special, so we took the opportunity to go.

For a small waterfront commercial district, Port Townsend has more than its share of good restaurants. We know that Thai restaurants are becoming ever more popular, but we were truly surprised to learn that there are three of them here. We had dinner at one, Khu Larb Thai, consisting of neau nam toke (beef salad), pad woon sen and garlic pork. The beef and pork dishes we’d order again; the vegetables in the pad woon sen were cut too large for the thin mung bean noodles in an otherwise tasty dish. The restaurant is worth a repeat visit whenever we’re in the town. 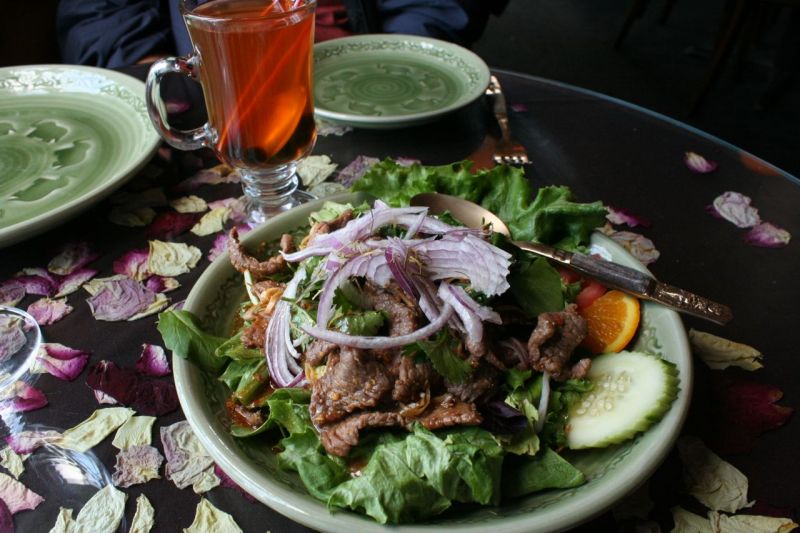 For dinner, we went to Aloha Ramen in the Greenwood neighborhood. The owners are from Hawaii, though they both are originally from Japan. The waitresses all were Japanese. The husband apparently trained as a chef. Aloha has been getting good reviews in the local rags and on Yelp.

My tonkatsu tan tan mein was disappointing. While the noodles were fine, the broth was very spicy but lacked complexity. It was also overpoweringly gingery. Even if a broth is spicy (and I like spicy), you should still be able to taste other things. As an example, the broth in Greenwood Mandarin’s jahm bong noodles has more going on. There were generous amounts of sliced tonkatsu pork on top, perhaps too much. There were around a dozen slices, and I wondered if tonkatsu was a typical embellishment for what is basically a Chinese-style soup noodle. In fact, this kind of preparation seems more Hawaiian in style, almost like saimin.

Kalua ramen was better, but the broth still seemed to be lacking something. The smokiness of the kalua pork infused the broth, itself not necessarily a bad thing. The smoky udon broth at Jimbo’s in Honolulu, for example, is great.

The best broth was in the black sesame ramen, which is probably closer to the basic ramens that Aloha started out with, which were shio, miso and shoyu. Somewhere along the way, they started offering many more variations, which usually doesn’t end up being a successful strategy.

You can order ramen combinations for a few extra bucks, which means with either pan-fried gyoza or garlic fried rice. We liked the gyoza; they had grill marks. The fried rice was very good. In fact, I was really impressed with the texture of the rice, which made me wonder how the restaurant achieved its chewiness without being in the slightest bit mushy. The rice wasn’t oily. Generous pieces of minced chashu are incorporated into the rice, and then topped with crispy fried garlic, clearly the best fried rice I’ve had at a restaurant in a long time. The rice comes with home-made fukujinzuke, which was red.