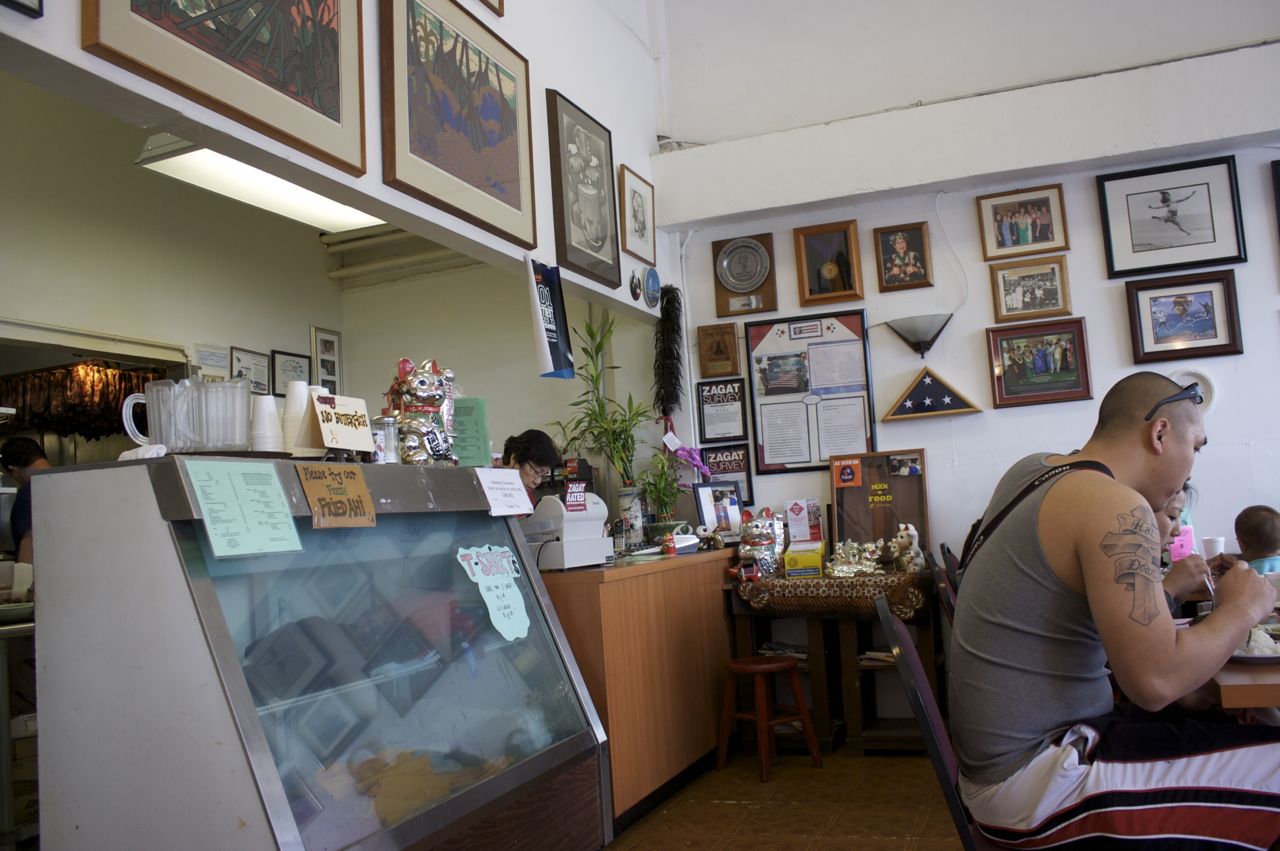 The last few days have been really blustery. Strong winds have been blowing across all the Hawaiian Islands, gusting up to 30mph right here in Honolulu, not exactly conducive to hiking weather. So we made a decision to stay in town.

Our day out to Kalihi started out pretty badly. Bishop Museum turned out to be closed. A visit to the bus pass center (about 1.5 miles away) to purchase a senior pass didn’t work out either. But, our day wasn’t a total loss because we got to eat at Helena’s, which is popular among the locals and much less known among tourists, likely because it is quite out of the way. It takes about 30 minutes to get here by bus. To add to its distinction, Helena’s was a James Beard Regional Classics Award Recipient in 2000.

Like Ono’s, Helena’s is a hole-in-the-wall diner that serves delicious island food. It’s less expensive than Ono’s and you can order a bunch of small portions a la carte, although plate lunches are also available. We took the small plate route: Kalua pig with cabbage ($3.80), luau squid ($3.60), long rice chicken ($3.60), pipikaula short ribs (small order, $4.70), poi ($2.60) and rice. The Kalua pig (☆☆☆½) is made in an imu (underground oven). The result is fork-tender and wonderfully smoky in flavor (more so than Ono’s).

The long rice chicken is basically chicken cooked together with rice noodles, ginger and broth. Helena’s is not bad (☆☆½); the chicken was dry. My wife and I both recall enjoying the version at Sib’s in LA, and we don’t recall it being soupy.

The star of the show is definitely the pipikaula (☆☆☆☆). Instead of boneless beef flank steak (like Ono’s), theirs are made with beef short ribs that are first marinated and then hung to dry over an oven. When ready to serve, they are fried in hot oil to crispy perfection. Even the slightly charred edges of fat exploded with flavor. These are best eaten out of hand (your fingers will be slathered in grease). There is also occasional pockets of gristle to get past (unless you enjoy eating it), but most of the pieces are meaty. Don’t forget to dip them in chili water and sprinkle with a little rock salt. The hearty beef flavor lingers long after the bones are discarded.

An island staple you won’t find in many places is squid luau. This dish superficially resembles Indian palaak, but the greens are taro leaves (luau) that have been long simmered with squid and coconut milk. Helena’s squid is chopped up; in other versions, you’re likely to get the entire tentacles. We’ve never had anything like this, but it definitely was delicious (☆☆☆).

Highly praised is Helena’s haupia (☆☆☆½). To me, there isn’t a more quintessential Hawaiian dessert than this. Helena’s is smooth and has a robust coconut flavor. The poi was sour, an indication that it has been fermented longer than, say, Ono’s. It has been likened to eating yogurt. How much tartness you like is a matter of preference. The chile water has a yellowish tinge, unlike Ono’s, which is more reddish. It has more chile potency than Ono’s and is saltier. Sliced onions and red rock salt also were provided.

Helena’s is onolicious. And the price is right, too.