I’m not particularly a big fan of tonkatsu but I will eat it. I’m usually indifferent and, if given the opportunity, will normally order something else. But it is Tonkatsu Ginza Bairin’s specialty. In this land known for its love of chicken katsu, this Ginza-based restaurant has set up business in Honolulu. There is also a branch in Singapore. The ones here are in Waikiki and at Ala Moana Shopping Center (Shirokiya). 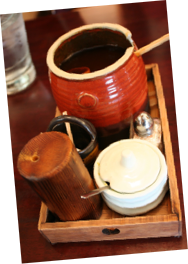 The prices at the Waikiki location are pretty steep, up to $35 for a kurobuta tonkatsu teishoku, $32 for a la carte. For a brief time, the restaurant is offering a special of Kurobuta Tonkatsu with Demi-Glace Sauce (top photo) for “only” $26, which includes “mashed” potatoes that served as a bed for the tonkatsu (it was more like smashed potatoes), shredded cabbage, and Japanese-style spaghetti (mediocre). Having the demi-glace served on the side let me sample their signature tonkatsu unadorned and also left me with other sauce options. For example, the condiment tray held a small crock of restaurant-made tonkatsu sauce, a bamboo shaker of shichimi, and a small container of prepared dry mustard. The other option was the dipping sauce that my wife got with her Wafu Oroshi Pork Loin Katsu ($21). The demi-glace is a tasty, cornstarchy concoction of two kinds of mushrooms (nameko and shiitake), stock and long-cooked onions (as in an onion soup) and other ingredients I couldn’t identify. But the tonkatsu sauce and the wafu oroshi were even better. The tonkatsu sauce itself is light (not as thick as some commercial stuff) and not too sweet, easily the finest and freshest we’ve ever tasted.

The wafu is an astounding dipping sauce–grated daikon artfully mounded in a pool of ponzu, soy sauce, and dashi, with shreds of katsuobushi for added flavor and texture.

The menu offers two kinds of pork: Canadian kurobuta (which seems to be the rage nowadays) and standard pork tenderloin. The difference is mainly in the fat content (kurobuta has more, making it a little more succulent, almost buttery) and pork flavor (again, a nod toward the kurobuta). The difference in flavor though is less apparent when the tonkatsu is sauced. Either selection is fork (or hashi)-tender. The panko batter is thinly applied and nicely crispy from being fried in premium cottonseed oil.

Even the shredded cabbage gets special treatment. You get your choice of several kinds of light and refreshing dressings. We chose the ume and the wafu. You could also dress it with that magnificent tonkatsu sauce.

Lunchtime offers a plate for $13.

Tonkatsu Ginza Bairin prepares entrees and other dishes with care. They obviously use the best ingredients and offer a great dining experience, but prepare to pay for the privilege.

Health Department closure several months ago notwithstanding, there was buzz about the new restaurant that served authentic Szechwan dishes. By authentic, I’m referring to the very liberal dose of Szechwan peppercorns that can leave your mouth numb for hours, a trait that is integral to Szechwan cooking, and to the equally liberal dose of dried red chiles. If you’re truly serious about this regional cooking, you have to accept these two linchpins as prerequisites to full appreciation.

Chongqing Chicken comes in large chunks in a batter featuring aforementioned peppercorns. The pepper lent the chicken a distinctive herbal and fragrant quality, a rendition not commonly served here. There were also the requisite amount of dried chiles. To my taste, more green onions would have been welcome.

The sliced catfish and tofu dish was excellent. Liberal amounts of ground pepper numbed the mouth. Slivered red bell peppers and large, meaty dried shiitake were also mixed in as well as Chinese celery that lent an exotic flavor of chrysanthemum leaves.

You get a lot for your money. Service here is spotty, and some of the staff speak very little English.

The dim sum here was good but not enough to prefer going to Jade Garden or Top Gun. Selection of dim sum is more limited than other places. Unless you want just the standard stuff (which does come around in a cart), you have to order from a picture menu, things such as turnip cakes or salt & pepper squid.

In general, the flavors of the dim sum are good, but the kitchen seems to skimp on some ingredients. For example, the lotus leaf sticky rice had a few pieces of lop cheung but nothing else, no shiitake, no chicken.

The tasty turnip cakes had no discernible dried shrimp and was slightly burnt on the edges.

We also ordered Chinese broccoli, which was good enough, though personally I don’t care for oyster sauce as a dressing as it’s just too overpowering and salty. Xiao long bao was okay. Our friends ordered the baked hum bao, which again was tasty enough but the filling was sparse. The dough though was very good, very gluteny. 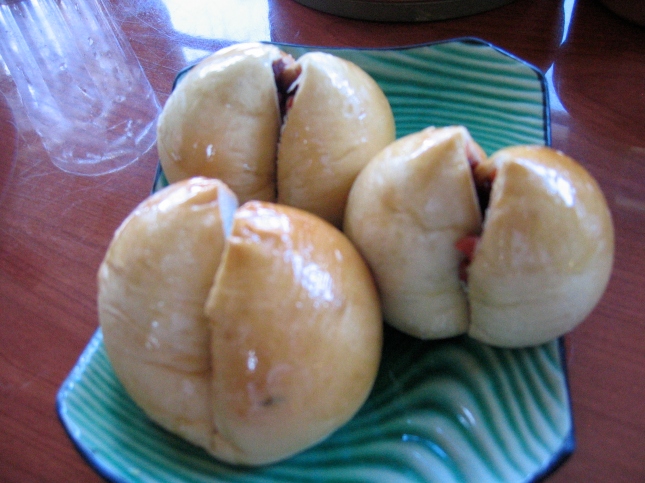 The skins of xiao long bao was on the thick side though not chewy. The dipping sauce was a reddish vinegar though not red wine vinegar. And there wasn’t much soup (or broth) inside but rather lots of meat filling. There was no detectable leakage. The flavor was fine, not something to shout about. And though the waitress warned about the temperature of the filling, I was able to bite into it right away with with no problem. It definitely was not piping hot as it should be.

The salt and pepper squid, on the other hand, was magnificent. Though the calamari was cut large, they were very tender with a thin, crispy batter, and sprinkled with salt, pepper, and fried garlic (and a hint of five spice), and served on a bed of shredded cabbage. This was so good that we ordered another plate. I could see just ordering this dish alone. 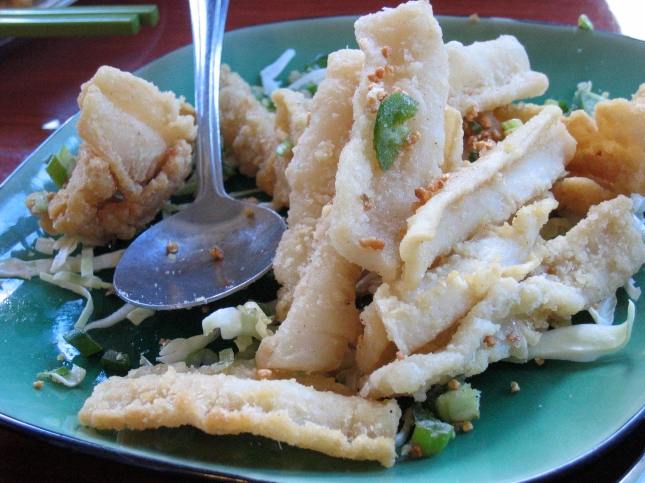