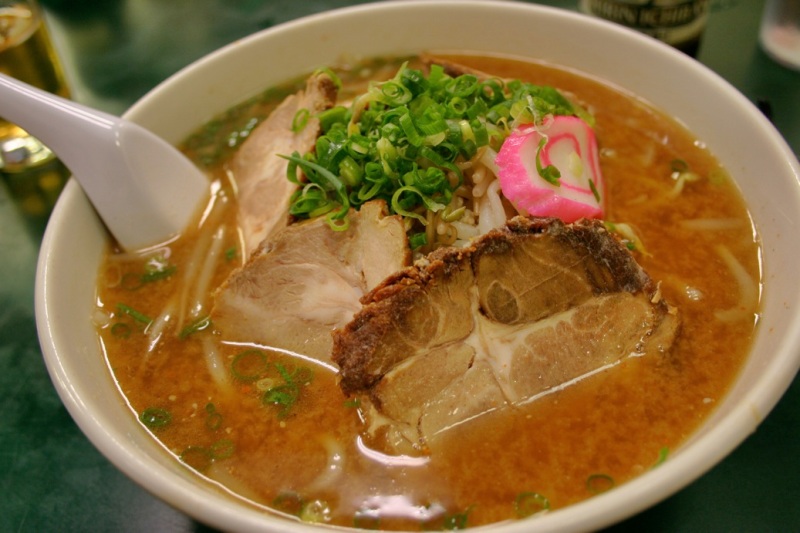 Ezogiku has a large, cult following in Japan of ramen connoisseurs. Since its Tokyo opening in 1968, it has served Sapporo-style ramen. As with any serious ramen shop, it makes its own soups from scratch. On top of that, Ezogiku makes its own miso paste for its signature miso ramen. Its production is confined to its Tokyo branch where its recipe is a closely guarded secret.

In 1974, Ezogiku opened a branch in Hawaii. Since then, several more branches have opened in Hawaii and one in Vancouver, B.C., the only city in North America. We have eaten at the Vancouver restaurant a few years ago. Back then, we were not impressed, the main complaint being its weak broth. In retrospect, this was surprising when you consider how much importance the entire operation places on its miso.

We decided to give the Waikiki branch a try. After all, when we passed by it two days ago, the place was packed with customers, many of them Japanese nationals.

I am happy to say that the ramen served here is much more impressive than Vancouver’s. The broth was rich, appropriately oily, with hints of spice. The noodles were also perfectly cooked. The slices of pork weren’t too lean and there was a single slice of kamaboko (fish cake), all topped with green onions. A very good ramen indeed. 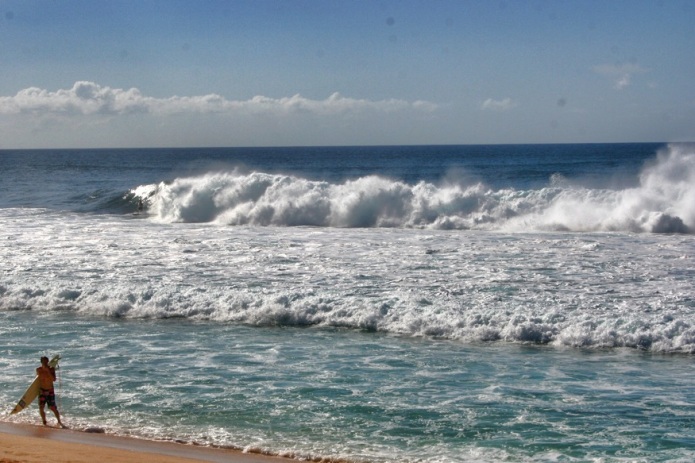 Winds were whipping across Hawaii all week. As we approached the North Shore, located on the windward side of Oahu, I wondered if the famed big surf tides that draws serious surfers (and their fans) from all over the world would put on a good display today. In December of each year, there is a world-famous surfing competition. Big kahunas pound the shoreline here in the winter months–waves can reach stupendous heights of 30-40 ft. At this time of year, it is impossible to find parking places and lodging. Today, it is well past the December-January months of big wave activity, but dedicated surfers were out in the ocean to try to catch the wave barrels as they formed.

We stopped at the Banzai Pipeline to be awed by the power of nature and to cool our heals in the rapidly advancing and retreating waters. There weren’t the crowds that clogged the beaches only a couple of months ago, but people were still standing on the sand, including photographers with huge telephoto lenses, admiring the few hardy souls out on their surfboards.

I’m not a cream pie fan, with one exception. I much prefer fruit-filled pies, especially fresh (uncooked) marionberry or strawberry pie. Word was though that Ted’s chocolate haupia cream pie was to die for. Since the bakery was on our route to Hale’iwa anyway, we made a dutiful stop here.

This was a great pie. There are two layers, one made with chocolate custard cream, the other haupia (or coconut pudding). The pie is then topped with whipped cream. Not in the least overly sweet, one bite of this pie was enough to have temporary amnesia about berry pies and put it on a level with the other cream pie that I am addicted to—key lime.

Luckily, you don’t have to drive all the way up to the North Shore to have this island classic. Many of the supermarkets in Honolulu sell it. 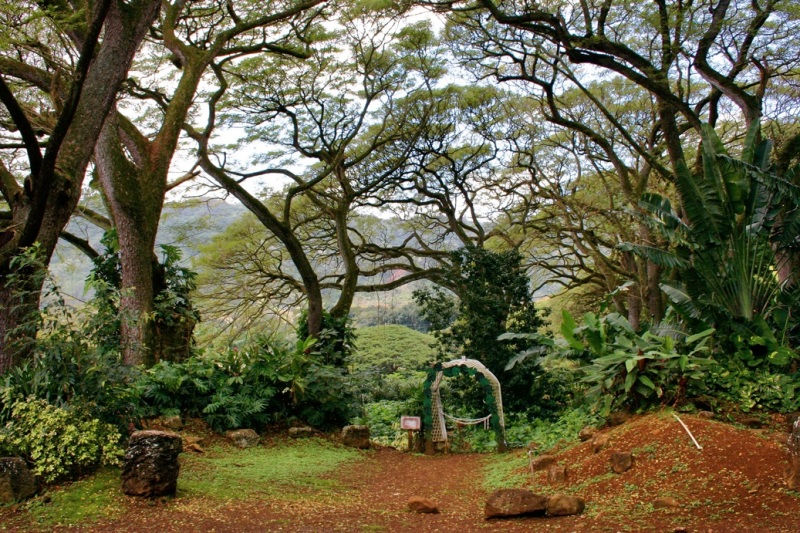 Though originally from Australia, the macadamia nut here in the U.S. is associated with the Hawaiian Islands. Just look around the confection section of most supermarkets, and you’re bound to find chocolate-covered macadamia nuts. Several species of the nut are toxic to humans unless specially treated, but the edible varieties are quite delicious, meaty and oily.

We stopped at Tropical Farms, where you can take tours and buy all kinds of macadamia products as well as Kona coffee and souvenirs. Employees also demonstrate how to crack open the nut on a log with a rock. The farm has stately, mature trees on the property, which require 7-10 years after planting to bear fruit. This is a pleasant stop if you have the time.

When ripe, macadamia nuts rattle inside their seeds

You might have seen it on an episode of Lost, a stand-in for a temple in South Korea. It is the temple of Byodo-In, a half-size replica of its namesake in Uji, Japan, built in 998 AD and considered a national treasure and a UN World Heritage Site.

The temple here is built mostly with concrete, the original being wooden. This may have been for practical reasons, for the one in Japan was repeatedly devastated by fire. It is also much brighter than the original; its posts and eaves are painted red, while the original is not painted at all.

The temple is very impressive on first sight. The Phoenix Hall in the center of the temple houses a 9-ft carving of the Buddha, painted with gold lacquer, later covered over with gold leaf. To the left of the temple is a large brass and tin peace bell, which you are free to ring by swinging the large wooden clapper suspended on ropes. Surrounding the temple are large ponds filled with koi. The grounds are also surrounded by lovely gardens. 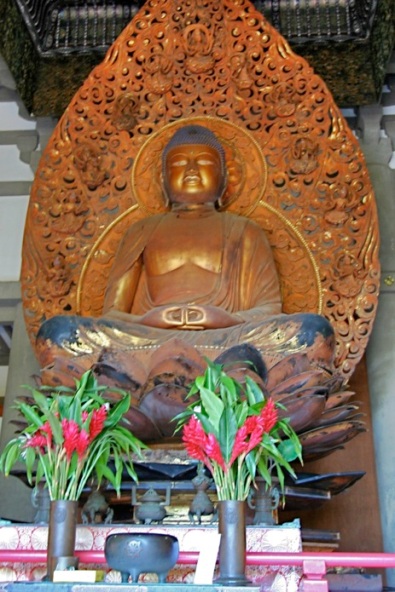 Wooden carving of Amida Buddha in the Phoenix Hall

The extensive koi pond is the home to hundreds of specimens

With the Ko’olau Mountains in the background, Byodo-In is one the most beautiful structures on the Islands.

A spectacular way to get from Honolulu to windward Oahu is State Hwy 61 (Pali Highway) through a pass over the Ko’olau mountain range. There is an overlook near the ridge where you can get a sweeping view of the northeastern side of Oahu.

The winds are strong up here, sometimes so strong that you can literally lean into it. The trade winds from the windward side blow through the pass and, by virtue of the Venturi effect, pick up speed and strength on its way toward Honolulu.

The bloodiest battle in Hawaiian history was also fought here when in 1795 Kamehameha’s forces landed on Oahu from Hawaii and conquered Kalanikupule near this lookout. Soon afterward, Kamehameha became the first king of the Hawaiian Islands.