In Varenna, we took our first bus on the tour. Today’s destination is The Dolomites in the Italian Alps, but not before a stop in historic Verona. Verona has a tumultuous history of wars and conquests by foreign invaders and has many architectural treasures that earned it the designation as a UNESCO World Heritage Site. Built in AD 30, the Roman amphitheater, Verona Arena, partially damaged by a devastating 12th century earthquake, still is used today to stage operas.

But, arguably Verona’s biggest claim to fame is its setting for Shakespeare’s Romeo and Juliet. Verona was quick to seize upon this tourist opportunity by building Juliet’s balcony. It also had her statue built that stands in the small courtyard outside. Somehow, the legend began that rubbing her right breast would bring the perpetrator much luck in love, be it man or woman.

I had the misfortune of my camera battery’s losing its charge without my having on hand a spare, which was left on the tour bus parked miles away. So, much time was wasted looking for a camera shop. When I did find a store (with our guide’s help), none of the batteries was charged, not surprisingly. It was pointless to buy one. With time running out, in our search for Basilica di San Zeno, we stumbled instead across the Verona Cathedral (Duomo di Santa Maria Assunta), a Romanesque church which replaced the existing one that was destroyed by the earthquake.

We grabbed a quick lunch at a cafeteria-style restaurant before boarding the bus for The Dolomites.

A sleeping pill gave me a good night’s rest while still battling jet lag. We were awakened at 7am by the peal of church bells. A wonderful buffet breakfast in the hotel of cold cuts (including Parma ham), granola, yogurt, pastries, cheeses, bread and blueberry tart was served. Delicious.

As we were on our own today, we took the ferry to Belaggio, the most commercialized and visited town along the lake. The “streets” are essentially cobblestone lanes crisscrossed by cobbled stairways, lined with businesses. Because the Lake Como area produces some of the finest silks in Italy, we purchased some scarves as gifts. A wine shop that we entered (Enoteca Cava Turacciolo) was advertising a wine tasting later that afternoon, which we would be unable to make. Legs of prosciutto di San Daniele were hanging from the ceiling, another air-cured ham like its Parma cousin. 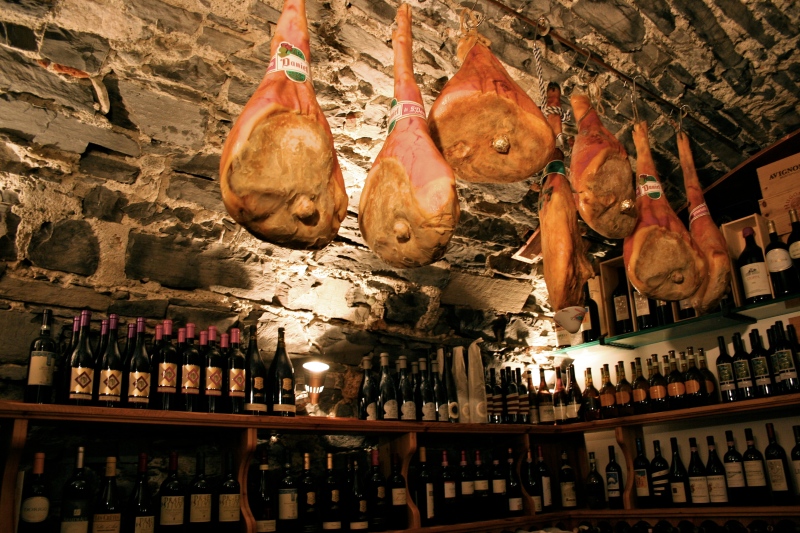 We next hopped on the ferry to Menaggio, a short ride to the western side of Lake Como. Most of the shops were closed because of pausa pranzo, the afternoon lunch break. Lucky for us, a gelateria was still open where we enjoyed the lemon and melon flavors. 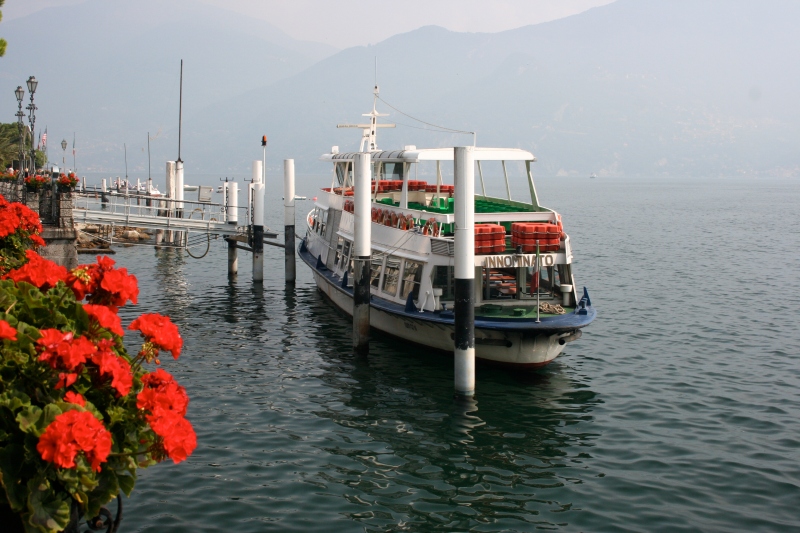